AMD announce their RX Vega series of GPUs, a series that will likely replace AMD's ageing R9 Fury lineup. This new series of GPUs was announced at AMD's Capsaicin and Cream Event at GDC, alongside their new "V for Vega" logo, modelled below by AMD's Raja Koduri.
AMD has also announced that their new Vega architecture will span from gaming PCs to pro-graphics and datacenter workloads, with the companies new High Bandwidth Memory Controller allowing GPUs to use larger memory pools and datasets than ever before. 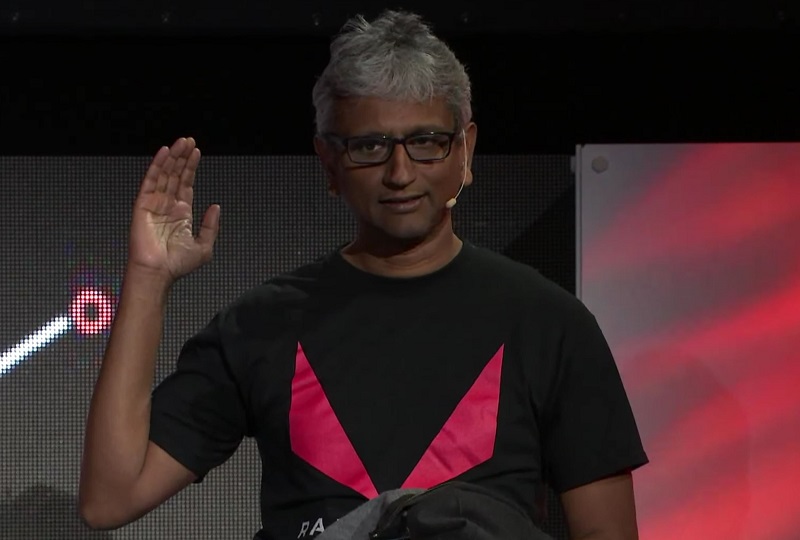 At this time it is unknown how well Vega will perform or how this GPU will be priced, leaving consumers with nothing more than a name and a logo, that being said the architectural changed that were made in Vega look very interesting, though their usefulness in today's gaming applications remains to be seen.

You can join the discussion on AMD's RX Vega series of GPUs on the OC3D Forums.

AlienALX
Well that's disappointing. Having said that it would be far more disappointing if they made loads of noise about it and then Nvidia sniped them like they always do.

I kinda like the "new" "quiet AMD". They look a lot less stupid than they used to.

If you have expectations for anything you will be disappointed. It's better not to have any, then be pleasantly surprised - Mrs Alien.Quote

AngryGoldfish
I like what AMD unveiled today even if it lacked Vega specifics. The 100% scaling from Sniper Elite 4 was exciting to see. Before DX12 arrived and disappointed us, the promise of dedicated multi-GPU support was an enticing prospect. With a partnership with Bethesda along with other companies, HBC, and multi-GPU scaling improving, that's enough to wet my whistle.Quote

AlienALX
They are remaining incredibly tight lipped and you can't really blame them. Last time they showed their cards first Nvidia gave them a bitch slap.

literal for the lol.

I think Raja is far more intelligent than the guy he replaced.Quote

BigDaddyKong
Did Ian leak the release day when he said his liquid service would be available on the 14th at launch? He did not say what month, but you know the day now

Type-8
Can't blame them for holding things back, Nvidia did announce the 1080 Ti today. Lets hope they're making Vega out of Witchcraft and Sorcery and it really does compete at the top end.Quote
Reply