AMD have today announced their new Radeon Pro Duo GPU, offering two Polaris 10 GPUs with a board power of less than 250W.
The Radeon technologies Group calls the Radeon Pro Duo "the World’s First Dual-GPU Graphics Card Designed for Professionals", though sadly this does forget AMD's older Dual Fiji-based Radeon Pro Duo, which was mostly shipped to game developers for VR game development.
The new Radeon Pro Duo will come with 2304x2 (4608 total) GPU cores and a total of 32GB of GDDR5 DRAM, offering peak performance of around 11.45TFLOPS when both GPUs are fully utilised.
This GPU is designed to accelerate content production, allowing users to utilise both GPUs for peak performance or utilise both GPUs in two separate applications to maximise productivity.

With the Radeon Pro Duo, designers can now simultaneously use two software packages, with one GPU dedicated to the functions of each application concurrently.  Live content creation using the first GPU, with real-time rendering and/or ray tracing on the second GPU is now possible.  The user can benefit from shortened design cycles or is now able to do more design iterations within the allotted design window for an overall better outcome.

The big selling point for the Radeon Pro Duo is its ability to multi-task, with AMD giving users the ability to dedicate each of this graphics cards' independent processors to different tasks, allowing users to easily use several GPU accelerated applications at once. 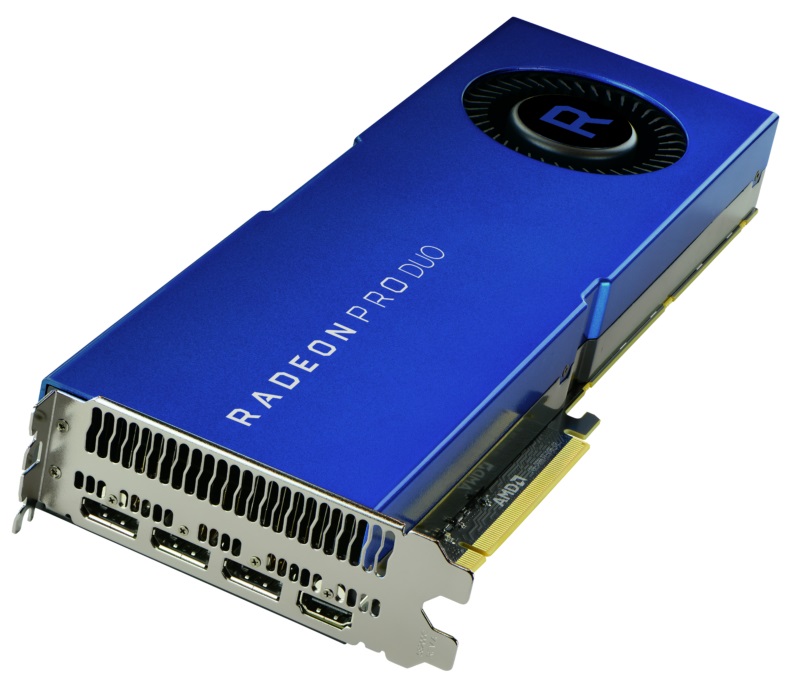 AMD's new Radeon Pro Duo occupies a very strange position in the market, especially given the fact that AMD fans are patiently waiting for Vega to release. It is also strange to see a dual-GPU graphics processor that is not made using high-end GPU products, making this new GPU technically inferior to the companies previously release Fiji Radeon Pro Duo, in all aspects apart from VRAM capacity and power consumption.

The Radeon Pro Duo will be available at the end of May with an expected price of $999 USD.

You can join the discussion on AMD's new Polaris-based Radeon Pro Duo on the OC3D Forums.

Fetchez La Vache
Having a Fiji Pro-Duo I was so confused when I saw this. AMD seem to want to outdo Nvidia on incomprehensible product names.

EDIT: Thats a damn good price for a Pro level dual GPU card with 16Gb of VRAM per core. The Fiji Pro-Duo will still outperform it at nearly 17 TFLOPS but the 4Gb HBM limit can be a real bottleneck for rendering at times.Quote

AlienALX
Quote:
It's not really. Look at the colour. Seem a bit weird? that's because it is aimed at professionals, not gamers, also hence the price.Quote

AngryGoldfish
Quote:
I mean, it's the same name as their previous dual GPU.Quote
Reply