Expect to see the screen again at CES 2020

- Update - Dell has since refuted WCCFTech's report and has stated that Alienware's 55-inch 120Hz OLED Gaming Monitor will release in Q4 2019. More information about this is available here.
Back at CES 2019, Alienware showcased a 55-inch 120Hz OLED gaming display which utilised DisplayPort 1.4 to enable 4K at 120Hz with cutting-edge HDR and VRR (variable refresh rate) capabilities.

At CES, several reports claimed that this display was set to release in the second half of 2019, but now we know that this was not the case, as WccfTech has attended E3 and asked for an update on the Alienware's impressive gaming screen.

Alienware called their 55-inch OLED screen a "conceptual product", stating that the product may never be released, though the screen is likely to be mentioned again at CES 2020, which takes place next January.

When it comes to pricing, a screen like this will cost upwards of $3,000, making it more expensive than most standard OLED TVs, though Alienware's higher 120Hz refresh rate and VRR support can partially explain this increased cost. 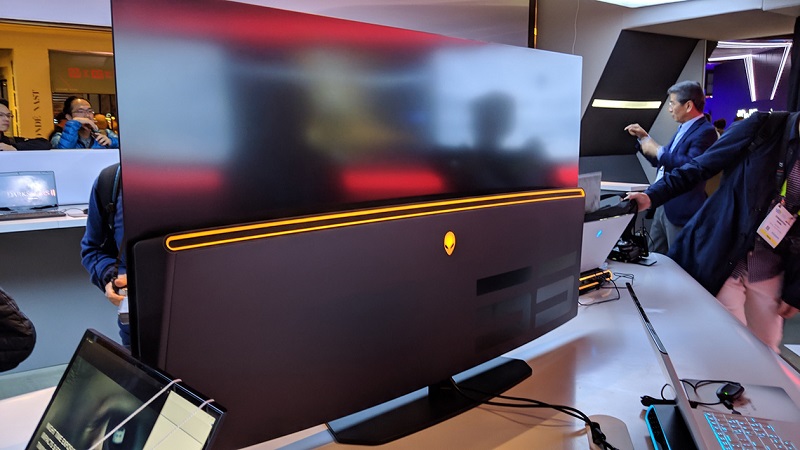 While it is disappointing to hear that Alienware's OLED alternative to Nvidia's G-Sync Ultimate Big Format Gaming Displays (BFGDs) may never release, but with a price tag of over $3,000, it is unlikely that more than a handful of PC gamers will ever have bought such a screen.

You can join the discussion on Alienware's 55-inch 120Hz OLED gaming display on the OC3D Forums.

Avet
Who ever cracks how to make OLED PC displays without burn-in would probably become the richest person the world has ever seen.Quote

tgrech
Burn in is far from the only issue, we mostly cracked how to deal with burn-in back when we had to use CRTs as monitors(Quick to active animated screensavers and pop up taskbars more or less solves the issue), they could burn in a fair bit worse than modern OLEDs, but standards & expectations are different nowadays(Could you imagine trying to RMA a 50kg monitor and getting told postage costs are on you?).Quote

Warchild
Quote:
Only an issue these days if you play games like FIFA