It looks like Acer is prepping to launch two new Nitro series notebooks, each of which will utilise Intel's 9th generation processors and Nvidia's latest Turing GTX series graphics cards.

In the slide below, as uncovered by "I_Leak-VN",  who discovered the image on a now deleted ITHOME post, we can see two Turing GTX graphics card options on each PC, the GTX 1660 Ti and the unreleased GTX 1650.

The GTX 1650 will be Nvidia's lowest-end Turing graphics card to date, and according to Videocardz, the graphics card is set to release on April 22nd. The launch of mobile Turing GTX series graphics cards will likely come a little later, coinciding with the launch of 9th Generation Intel Coffee Lake-H mobile processors. 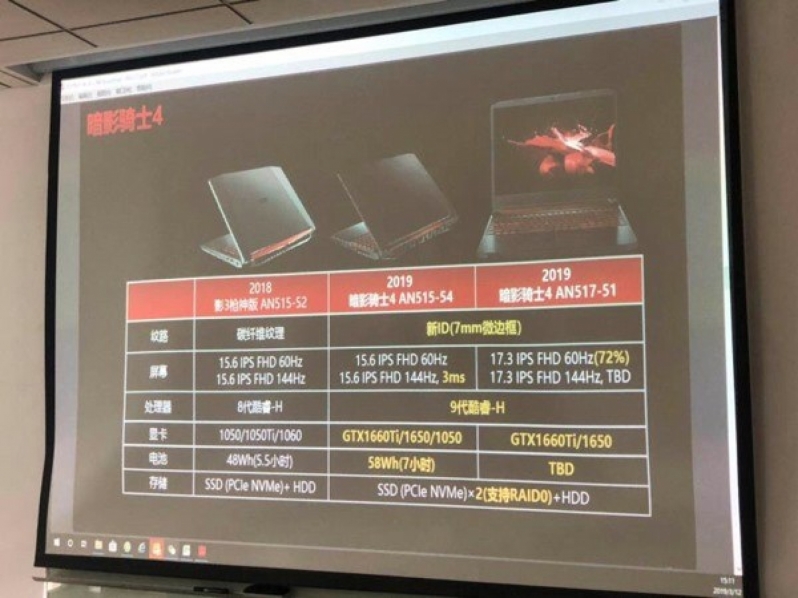 Mobile variants of Nvidia's GTX Turing graphics cards are inevitable, especially given Nvidia's desire to bring their latest architecture to new markets and form factors. Recent rumours have also suggested that we will see these graphics cards paired with AMD Ryzen Mobile processors, thanks to notebook manufacturers who plan to mitigate the impact of Intel's longrunning processor shortage.

You can join the discussion on Acer's planned GTX Turing powered Nitro Gaming notebooks on the OC3D Forums.