A 43-inch screen that offers refresh rates up to 144Hz and G-Sync Compatability.

When it comes to 4K, bigger is better. Yes, 24-inch and 27-inch 4K displays exist, but the benefit of high resolutions is the ability to scale to large screen sizes without blocky pixels. This is where monitors like the Acer Predator CG7 (CG437K Pbmiiippuzx) come into play, featuring support for refresh rates of 120Hz (144Hz when overclocked) at 4K while also offering support for Adaptive Sync.

We reported on this screen back in April, but now this screen is available in the US, costing Americans 1,499 of their US dollars, but for that, they get G-Sync compatibility and certified VESA DisplayHDR 1000 support.

The Predator CG7 utilises a VA panel which boasts support for 90% of the DCI-P3 colour space, delta E 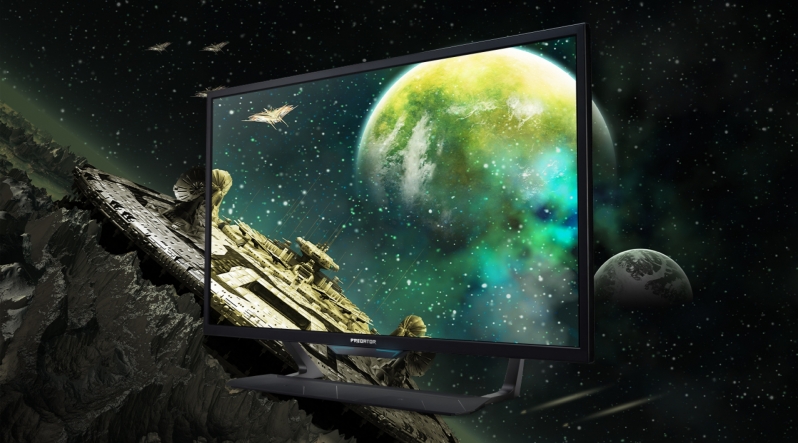 At this time, it is unknown when this screen will become available in the UK and Europe.

You can join the discussion on Acer's Predator CG7 Large Format HDR gaming display on the OC3D Forums.

NeverBackDown
Not that bad of a price for what you get. Yeah you can get similar TVs for bigger sizes and as good picture quality, but monitors are tuned for PC so I would guess input lag and response times would be lower. Plus you don't need a 65inch TV 3 feet from your face

Still out of my price range though

VonBlade
Nurse, it's happened again. Fetch me some wet wipes and a clean pair of boxers.
Unf.Quote

looz
This is an interesting bracket. I was going to praise Samsung's Q60 TV as a replacement but apparently their 43 and 49 inch models are 60Hz native without VRR. But still, expected to have pretty fierce competition from smaller TVs.Quote

AlienALX
Quote:
Don't knock that until you've tried it

NeverBackDown
Quote:
I can promise I would not enjoy moving my head all around to look at the corners of the screen