Acer has officially revealed one of their largest gaming monitors to date, packing support for adaptive sync, a resolution of 4K and an ultra-high refresh rate of 144Hz. Meet the Acer predator CG438KP, Acer's largest VESA Adaptive Sync monitor.

During their announcement, Acer specified that their CG437KP would support variable refresh rates (VRR) and support the function with both gaming PCs and consoles, hinting at G-Sync compatibility by citing Nvidia's support for Adaptive-Sync on Pascal and Turing series graphics cards.

With a screen size of 43 inches, Acer is targetting their Predator CG437KP at gamers who want to have a television-scale 4K monitor, a size which enabled them to fully see and appreciate the visual upgrades that are offered by ultra HD displays. In terms of HDR support, Acer also promises to deliver DisplayHDR 1000 support and 90% coverage of the DCI-P3 colour space.

Given Acer's promise of "console functionality", it is likely that the Predator CG437KP will support both HDMI and DisplayPort 1.4 inputs, with HDMI being reserved for consoles while DisplayPort 1.4 is designed for use with gaming PCs that target the screen's full 4K 144Hz specifications. 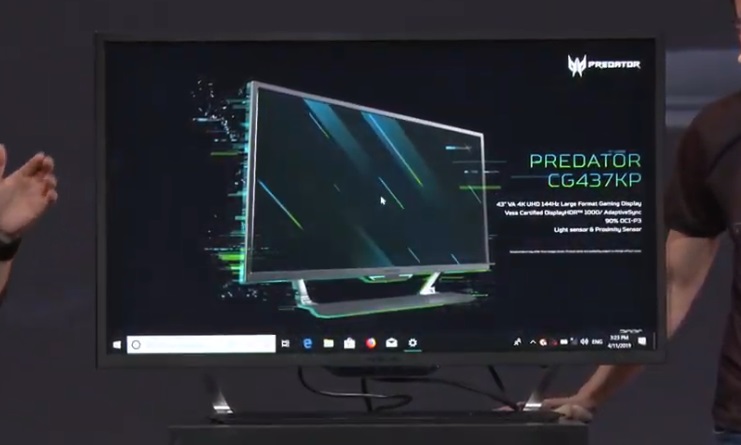 At this time the release date and pricing of Acer's Predator CG437KP monitor is unknown, though it is expected to release sometime this year.

You can join the discussion on Acer's Predator CG437KP 43-inch 4K 144Hz Gaming Monitor on the OC3D Forums.