At CES 2020, Acer has unveiled something massive, a 55-inch OLED gaming monitor that's said to offer gamers VRR support, refresh rates of up to 120Hz and lower response times than most other OLED screens.

TFTCentral has reported that this screen will release in Q3 2020 with a price tag of $2,999, delivering gamers high-end specs and pricing levels that high-end, large screen OLED lovers should expect.

This screen covers 98.5% of the DCI-P3 colour space and reportedly features a colour deviation of E <1, making this screen incredibly colour accurate. In short, this screen is designed to deliver gamers a high refresh rate, low-latency, Ultra HD gaming experience with OLED quality HDR. Basically, Acer plans to offer everything a gamer could want from a large 4K screen with its Predator CG552K.

At this time it is unknown if this screen will support HDMI 2.1, though VRR support over HDMI does suggest that this screen supports partial HDMI 2.1 support at a minimum. Full HDMI 2.1 support could make this screen ideal for use with future games consoles, such as the Xbox Series X and PlayStation 5, both of which are said to support 120Hz framerates if developers desire. 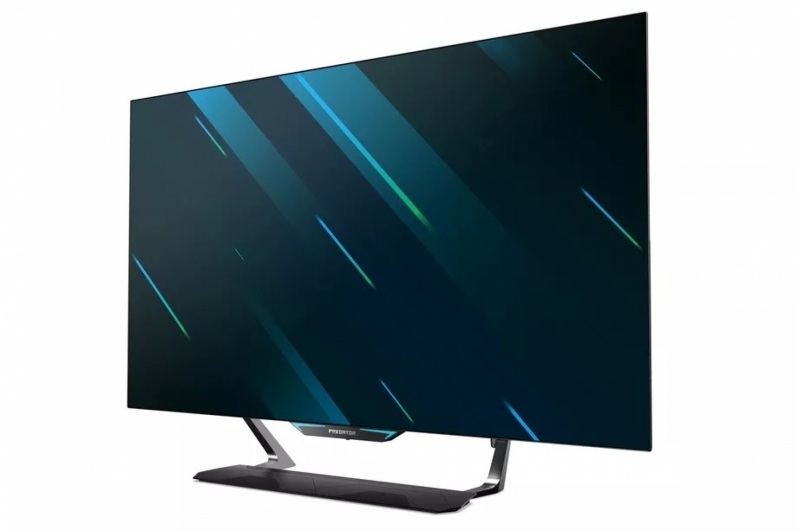 You can join the discussion on Acer's monstrous Predator CG552K 120Hz OLED VRR gaming monitor on the OC3D Forums.

For anyone who doesn't know, LG's OLED C9 panel is being used in this. However, they cut brightness down in half(little more than half), nearly doubled the price, and supposedly using DP 1.4 with no mention of HDMI 2.1 or not(like the TV).

boria0
Lg c9 for double the price. They must be very proud. Well done!!!Quote

WYP
Quote:
It's worth noting that DP 1.4 can actually do 4K at 120Hz, whereas no consumer graphics card currently supports HDMI 2.1 output for 4K 60+Hz. HDMI 2.1 is pointless for a PC monitor ATM, and it is likely that no display controller currently supports both HDMI 2.1 and DisplayPort 1.4 concurrently.

This is a monitor for the PC market, and its value comes from 4K 120Hz support that's usable today, its low colour deviation value, and its high DCI-P3 coverage.

As cool as full HDMI 2.1 is, we need GPUs that support it. They will likely come later this year, but they are not gonna be ready until ??? (my guess is July/August) for next-gen Nvidia.

This is not to say that I think the price is worth it, I'm just saying that you are expecting a lot if you want DisplayPort 1.4 and HDMI 2.1.Quote

boria0
Nevermind hdmi 2.1 Problem is that we are all waiting for an oled monitor that you can actually put on your desk 32-40 inch. And if someone has the space for 55inch then paying 3000 when you can buy lg c9 for 1500 is ridiculous. If this article is correct it might be the dumbest release of the decade and it only just started.Quote

NeverBackDown
Quote:
I'm not expecting a lot. The Panels already support and ship with HDMI 2.1 on the TVs. All they did was add a DP option. Literally 0 effort.

I know DP1.4 supports 4k/120. Point is they are charging an absurd amount of money, reducing the features of the panel, and still not giving them the latest display standards.

You're better off buying the TV and getting a next gen Card with HDMI 2.1. it would STILL be cheaper.Quote
Reply