4670 Crossfire - The secret to budget gaming?

Call of Duty 4 is a stunning DirectX 9.0c based game that really looks awesome and has a very full feature set. With lots of advanced lighting, smoke and water effects, the game has excellent explosions along with fast game play. Using the in-built Call Of Duty features, a 10-minute long game play demo was recorded and replayed on each of the GPU's using the /timedemo command a total of 5 times. The highest and lowest FPS results were then removed, with an average being calculated from the remaining 3 results. 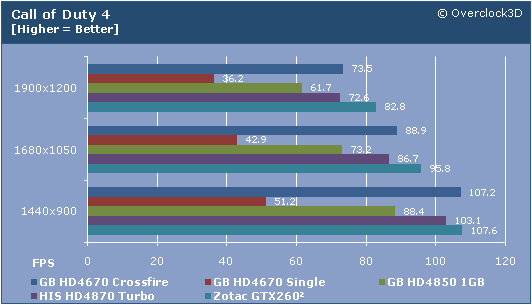 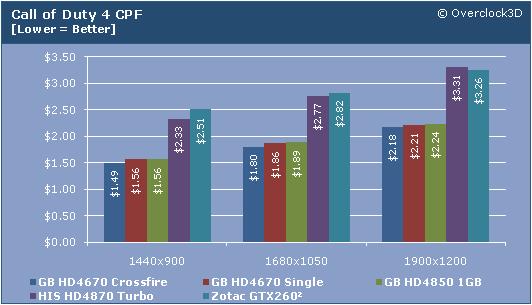 Crysis is without doubt one of the most visually stunning and hardware-challenging games to date. By using CrysisBench - a tool developed independently of Crysis - we performed a total of 5 timedemo benchmarks using a GPU-intensive pre-recorded demo. To ensure the most accurate results, the highest and lowest benchmark scores were then removed and an average calculated from the remaining three. 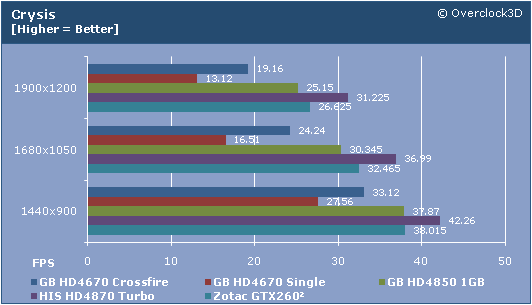 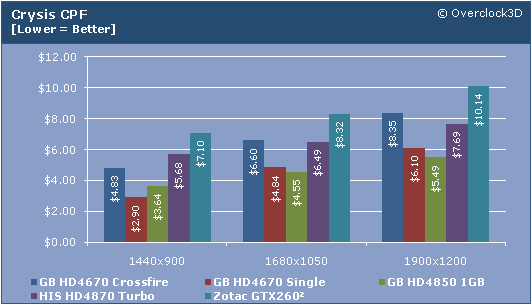 Once again things start off looking really good for the 4670 Crossfire configuration in CoD4 with the only competition at lower resolutions coming from the GTX260. As the resolution is increased the 4870 is given a chance to catch up, almost matching the dual 4670's score, but unlike we previously predicted the 4850 is absolutely nowhere to be seen and sits in a firm last place. This certainly bodes well for the CPF (cost per frame) scores, with the 4670 Crossfire setup showing the best value for money out of all the cards.
Crysis on the other hand, much like the 3DMark Vantage benchmark; puts the 4670's through hell. While it has to be said that at the lowest resolution of 1440x900 the cards are only within a few FPS of the 4850, once the resolution is bumped up the whole experience becomes a slideshow almost to the point where we could have closed FRAPS and counted the time in between each frame ourselves.

soapsupah
Nice article, for me personaly ATI still the best in budget gamming, no one can compete (and now entering high end also

), the only problem about two low end cards are that if the guy thinks like me it will be better get a good one and with some more time another one to Xfire / sli, better than buy two low ends that cost a little more than they bigger brother, also as i saw in the review the performance in high resolution (probably because of smaller memory)

but if the dude is not planning to upgrade, all i should say (after seeing this review) is go for it its a Xfire at the price one of card

Rastalovich
It's a great study in raw fps output of the 2 in xfire.

xfire has had the luxury of being attached to many great Intel 3/4 series mobos. Something that could/should have been exploited more, and used as a twisted dagger.

Whilst the artificial benching of some markers approaching 4 years of age, it would be with reluctance perhaps, that I would immediately dismiss anything benched prior to 3dmark06. Indeed 3dmark06 is living on extremely thin ice. However, this is ofc dependent on what type of gaming u entertain. Being as there has been a lull in great advancements in gaming imagination, yet alone releases, apart from a fist-full of recycled titles, the number of really-new released games - a user can be forgiven for sticking with a game that could be years old.

Be that as it may, if your on a budget, it could be recognized that you could play such games. If u don't subscribe to buying each game as it's released, u would similarly not be on quite a budget perhaps. 3 or 4 new games and u could be in 4xfire. Similarly, u won't be immediately looking at the 64xQQxAA++ capabilities that ur system would take advantage of. Here then u may not be looking at the 4870 or 260 in the same light - ur after raw fps for ur own personal gaming reasons.

Taking a sideways glance at the PhysX aspect, it would probably be a good run to have taken the driver away from the 260 whilst doing the benching. The effect isn't something that will make a tremendous difference, but using the 260 with a PhysX benefit over cards that don't entertain it, and graphing the results as fps or mark related, means we allow the 260 to do the work the others can't but similarly allow them to be compared, has the 260 doing work unnecessarily. Being as a purchasing decision could be made without PhysX in mind, the card is held back - if u like. A few fps ? Purchasers and forum users use those fps and marks as a religion to condemn each others camps.

As a suggestion to a purchasing user, I couldn't really suggest that they shun the quality aspects, but if the enthusiast themselves is on such a budget and is a massive fan of a single type fps game, it could be a pursuit for them. Still not something I could recommend with a clear head over a single card with some quality aspects. If they were an ATI fan, I would urge a 4870, and equally be happier that they not have so much a chance to be calling me cos the driver aspect has done "something".

Luigi
May I ask why the CPF was worked out with $$?Quote

MrCaffeLatte
Ah, if I am allowed to link to another review website, here it presents a 512mb GDDR4 variant of the 4670. Perhaps with 2 of these in crossfire, the higher end benchmarks would be different? Go to Hexus.net and add this rubbish onto the end: /content/item.php?item=16894 (I can't post URLs yet).Quote
Reply