343's Studio Head, Josh Holmes, has mocked those against Halo running at 60FPS, saying that it was doing more than just adding "visual comfort" while posting on the Teambeyond forums.

He states that increasing the framerate decreases the time between player input and seeing your actions in screen, making the game more responsive as a result.

“Framerate directly impacts the moment to moment connection between player input and what is drawn to screen. It’s logically incoherent for you to complain on the one hand about any extra frame of animation drawn between actions in the game and then turn around and state that framerate has no meaningful impact on gameplay beyond visual comfort. That is factually incorrect”,

“Now if the point you’re trying to make is that faster response times won’t improve your experience when playing a game that brings you no joy, that is a coherent argument. Everyone has their own subjective opinions about stuff”,

When a forum member posted that 60FPS does not add anything to gameplay Josh Holmes posted this response under his forum name Sal1ent. 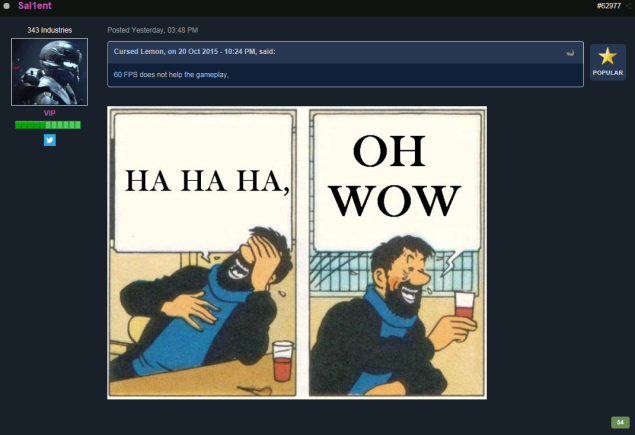 (Screenshot from the Teambeyond Forums)

It is great to see more titles on consoles running at 60FPS, though it is arguable that Halo 5 did have to sacrifice the franchise's popular split-screen campaign mode in order to achieve this.

You can join the discussion on Halo 5's Framerate on the OC3D Forums.

343's Studio Head, Josh Holmes, has mocked those that are against Halo running at 60FPS https://t.co/YXD920DeDw pic.twitter.com/29DNp5Cwdl

ph235
I can't wait till next week, really looking forward to H5. 60fps is great, but 30fps wouldn't have been a disaster imo - the game looks like it's gonna be a lot of fun

SpencerUk
Why can't you have the best of both worlds?, 60fps and pretty graphics?

I don't own an Xbox One but I enjoyed the Halo series of games under Bungie (Especially Reach!) but 343's take has been underwhelming for me.Quote

SuB
Quote:
Because it's on an xbox one, mostly.Quote

its a bit of a silly debate to have when it comes to frame rates, any one who plays games for any length of time should notice that he higher the frames the better and when it comes to a fps then its doubly so as it does affect how you play.

its all fair if a game like stick of truth is 30fps its been made to look like the cartoon and its turn based with no real fast paced action. but anything that requires any sort of pace or fluidity really does need higher fps. I have been known to reduce visual quality so i can always achieve 60fps. and i dont see the issue with that. i have however seen people use 4k and prefer 4k res with bells and whistles at 30fps i personally dont comprehend that but there are some people who really do just want uber graphics and to hell with the frame rate.. That is just a preference thing. "although i really dont see how you can argue that its better"
But to say twice as many frames per second wont add anything to the game play in a fps is a bit silly. one can only imagine that the person never played a fps for a competitive clan or something.
I know personally when i used to play swat 4 for a clan if i was playing at 30fps i may as well have just gone home.Quote