Zen 3 support for AM4 confirmed?

AMD has committed to supporting its AM4 platform until 2020, but this has left many to wonder what will happen with AM4 in 2020. Will Zen 3 support AMD's socket AM4?

In an official Reddit thread from XMG, as reported on by Videocardz, the company confirmed that its XMG APEX 15 notebook, which uses AM4 socket processors and can accommodate AMD's 16-core Ryzen 9 3950X, is slated to be compatible with AMD's Ryzen 4000 series of processors.

Given the fact that XMG's APEX 15 notebook uses AMD's B450 chipset, it stands to reason that AMD's Zen 3-powered Ryzen 4000/Ryzen 4th Gen processors will be compatible with AM4 socket motherboards and 400-series and newer chipsets. 300-series AM4 chipset are also likely to be supported, but XMG only commented on its B450-based APEX 15 notebooks.

With DDR5 memory being over a year from the market, AMD is certain to continue to use DDR4 memory with its Ryzen 4th Gen/Zen 3 processors, making AMD's continued use of AM4 probable. AMD would be foolish to move away from AM4 if they had plans to adopt DDR5 in 2021/2022. Maintaining AM4 support will also help encourage existing Ryzen users to upgrade their systems. 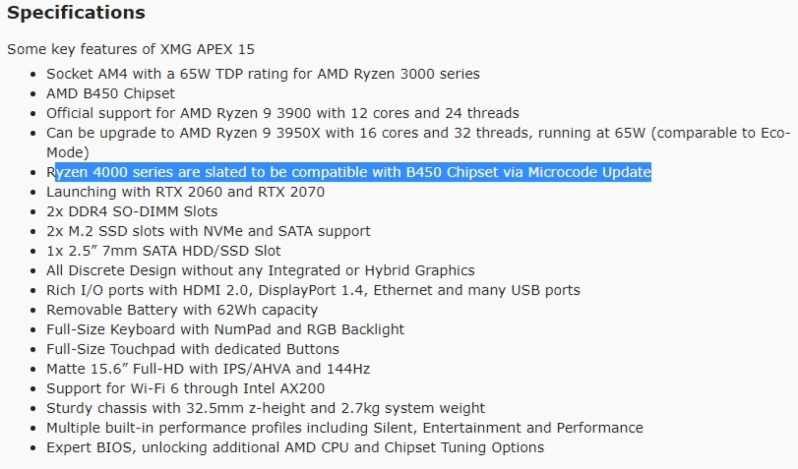 At this time, it is unknown when AMD plans to release its Ryzen 4000 series of desktop processors, though it is expected to be in late 2020.

You can join the discussion on XMG's confirmation that Ryzen 4000 series CPU support is "slated" to come to AM4 motherboards on the OC3D Forums.