With Zen 3, AMD promises a 19% IPC increase over Zen 2, which comes through various architectural enhancements. On top of this, AMD has promised higher boost clock speeds, offering another avenue which will deliver Ryzen users a performance upgrade. In this article, we will be discussing AMD's architectural changes with Zen 3, how these changes will impact various workloads and how these changes have made Zen 3 AMD's strongest product offering to date.

For Zen 3 and the Ryzen 5000 series, AMD isn't releasing a new AM4 motherboard chipset. All 500-series AM4 motherboards will support Zen 3, requiring nothing more than a BIOS update to deliver Zen 3 support.

Motherboard manufacturers are already preparing new 500-series motherboard designs for Zen 3 processors, offering refined designs over their original 500-series offerings for those who wish to use them.

AMD's Ryzen 5000 series processors will be available on November 5th, and by then, all 500-series motherboards should have Zen 3 compatible BIOS' available. 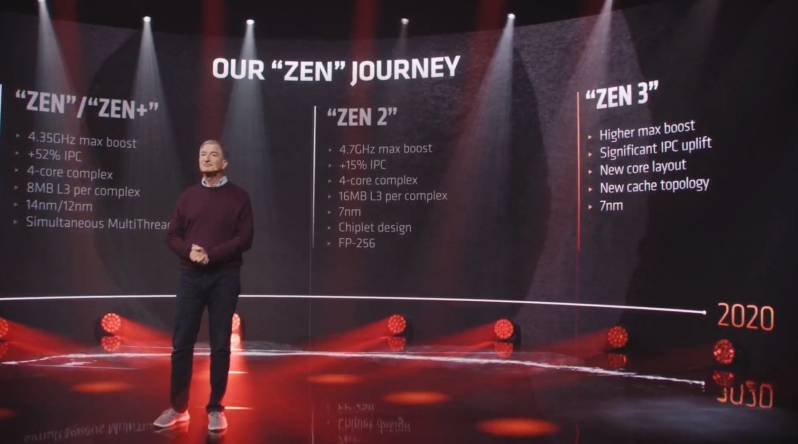 IPC stands for Instructions Per Cycle, and before we talk about Zen 3's architectural enhancements, we need to discuss what IPC gain are and what they aren't.

When AMD claims that Zen 3 offers 19% IPC gains, that doesn't mean that Zen 3 will offer a 19% performance gain in all CPU-limited applications. When discussing IPC changes, it must be noted that manufacturer-provided IPC gains are calculated and averaged out across a variety of workloads. This means that not all CPU-limited applications will see 19% performance benefits, with some seeing larger gains while others see shallower performance enhancements.

AMD's 19% IPC gains are calculated as an average across a range of 25 workloads, setting consumer expectations for what enthusiasts should expect from Zen 3.

With Zen 3, one of AMD's largest innovations is their redesigned cache topology and core layout, which sees Zen 3 core complexes (CCXs) which are comprised of eight cores. With Zen 2, each eight-core chiplet was constructed using two quad-core complexes, with communications between these two core clusters receiving inter-CCX latencies.

The benefits of AMD redesigning Zen's core complexes are twofold. First, AMD has enabled faster inter-core communications through the elimination of inter-CCX latencies when communicating with cores in the same chiplet. The second is that each CCX's 16MB of L3 Cache can now be combined into a larger unified L3 cache. 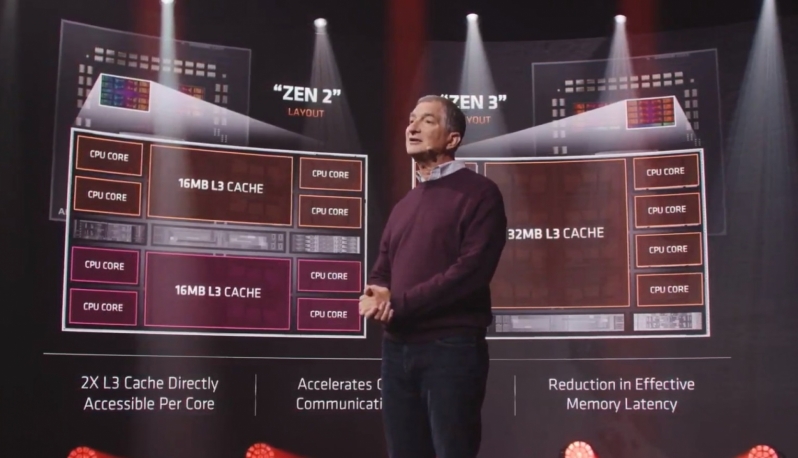 With Zen 3, each CPU core has direct access to 32MB of L3 cache. With Zen 2, each core on a module had direct access to 16MB of L3 cache and access to other caches with an inter-CCX latency penalty. These changes allow Zen 3 to offer reduced average L3 cache latencies, allowing Zen 3 cores to less time waiting and more time working. Think of decreased latencies as lowered waiting times; the less time your CPU is waiting, the more time it can spend working.

Some workloads are more latency-sensitive than others, with gaming being especially sensitive to cache latencies. AMD's new cache layouts are a primary cause of Zen 3's performance enhancements in gaming workloads, especially for titles like CS:GO.

AMD's 8-core CCXs also eliminate other inter-core communication latencies, which will be beneficial for some multi-threaded workloads. 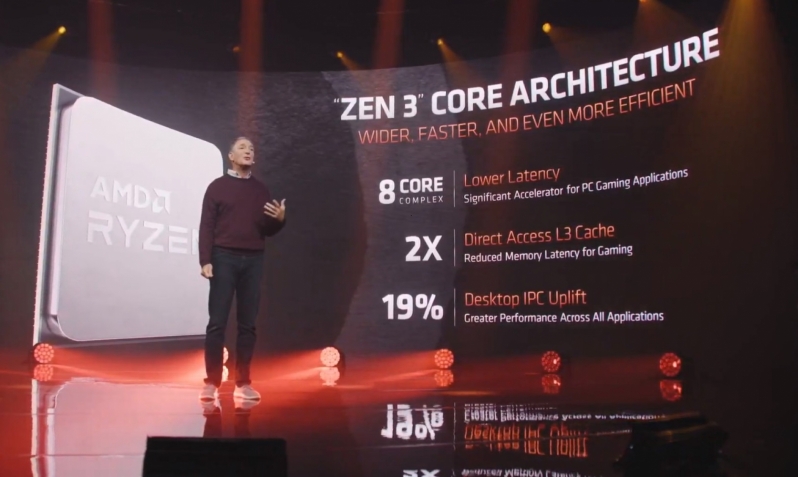 AMD's core topology redesign isn't the cause of all of Zen 3's performance enhancements. With Zen 3, AMD claims that they have enhanced their Branch Predictor, Execution Engines, Front End and Cache Prefetching mechanisms.

Zen 3 won't just see performance benefits when cache latencies are involved. Zen 3 will see performance gains across a wide range of workloads. You don't get a averaged 19% IPC increase for fixing one problem, which is great news for Ryzen fans.

With so many changes coming with Zen 3, there is a reason why AMD calls Zen 3 an all-new processor design. The fundamentals of Zen 2 have been altered, and the results of these changes are mindblowing. A 19% IPC gain is no small feat, especially without the benefit of process node advancements. AMD's engineers should be proud of their work. 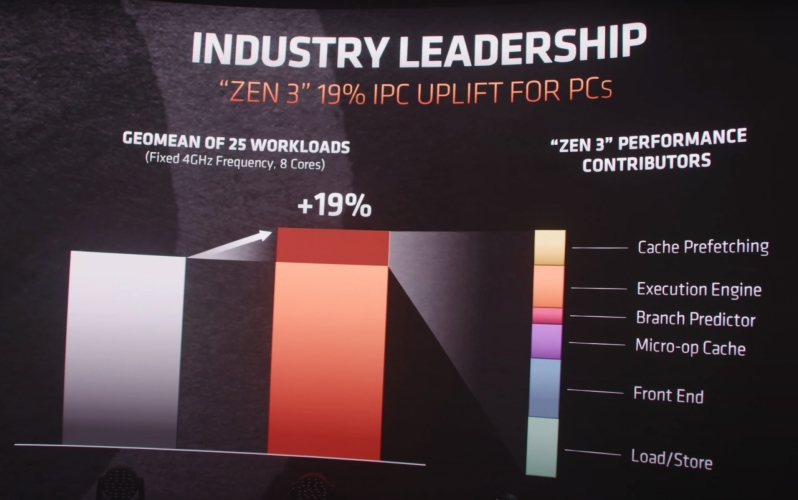 Specifications - It's All About the Cash!

With Zen 3, AMD's Ryzen 5000 design delivers higher boost clock speeds than their Ryzen 3000 series counterparts and will ship with price tags that are $50 higher than their predecessors.

While some AMD fans have complained about Zen 3's "price increase", it must be noted that AMD is offering its customers more value for money through Zen 3's increased performance levels. Thanks to AMD's continued use of their AM4 socket, users of 500-series motherboards do not need to change their motherboards to use Zen 3 processors. In time, many 400-series motherboards should also receive support for Zen 3 through BIOS updates.

AMD is no longer playing catch-up with Intel, which means that AMD doesn't need to be the so-called "value performer" anymore. Even so, AMD's Ryzen 3000 series processors offer great value to consumers when compared to today's CPU offerings. That said, the fact that Microsoft's Xbox Series S is $299 and features an integrated 8-core processor makes AMD's Zen 3 pricing seem a little high. 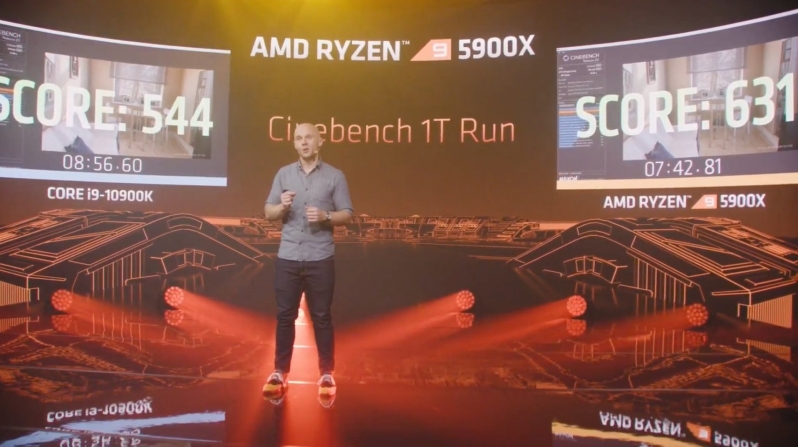 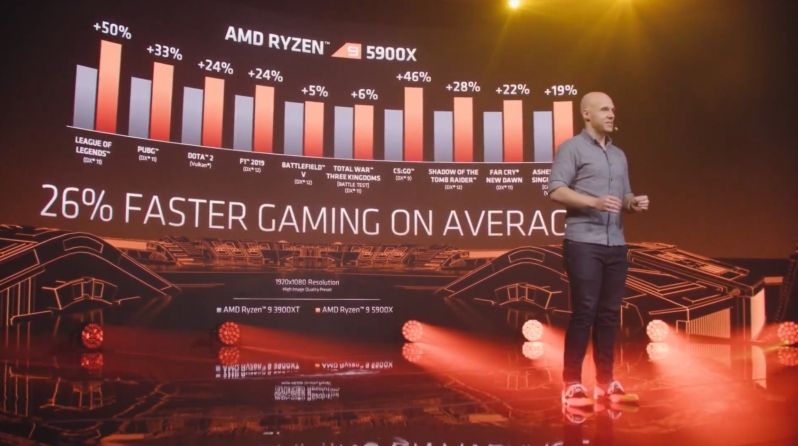 AMD has made some big promised with Zen 3, from claiming gaming leadership and single-threaded performance leadership to claims that they offer better value than Intel in seemingly all areas of the desktop PC market.

Zen 3/Ryzen 5000 series processors will be released on November 5th. Expect to see a review from us at or before this date.

You can join the discussion on AMD's Ryzen 5000 series of processors on the OC3D Forums.

g0ggles1994
I was impressed, until I saw the price increases.Quote


compared to how nivida and intel milked me over they years that´s nothing i complain about.
3-5% more performance from intel and the price increased.


the only thing i am a bit disappointed about is that the x470 support will only come in january 2021.
i have a crosshair hero 7 that i would like to upgrade with the 5950x.Quote

WYP
Quote:
Ah well. The X570 and B550 people will have given the CPU a proper beta test for you.