What is Intel's SuperFin? 10nm Evolved?

What is Intel's SuperFin? 10nm Evolved?

One of the biggest reveals of Intel's 2020 Architecture Day was the disclosure of 10nm SuperFin, an enhanced version of the company's 10nm process tech which Intel calls the "the largest single, intra-node enhancement in the company’s history."

Intel's Raja Koduri compared the leap from 10nm to 10nm SuperFin as a design shift which offered similar performance benefits to a full node transition, delivering a version of 10nm which may finally match the company's original performance expectations for 10nm.

Thus far, Intel's 10nm node has been a huge disappointment, releasing behind schedule and with performance levels and yields which have disappointed hardware enthusiasts and investors alike. With SuperFin, Intel may have finally delivered what 10nm was meant to be, and that is good news for the company's hardware roadmap.

Intel has enhanced many of their 10nm FinFET structures, adding more gate pitch, refinements to their source/drain crystal structures and improve current throughput. Thanks to Intel's myriad of 10nm changes, the company is delivering 17-18% better transistor performance with 10nm SuperFin. This change will allow new 10nm silicon to clock higher and offer increased performance levels. 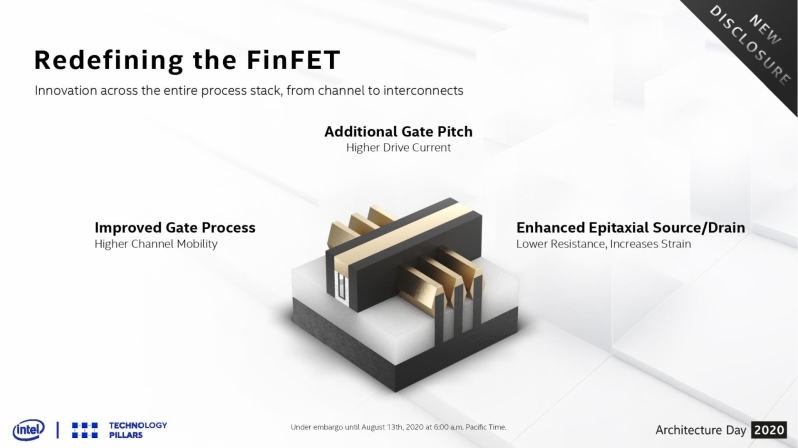 Below is a detailed list of Intel's 10nm SuperFin improvements. Intel has improved its 10nm node by:

- Enhancing epitaxial growth of crystal structures on the source and drain, thus increasing strain and reducing resistance to allow more current through the channel.
- Improving gate process to drive higher channel mobility, which enables charge carriers to move more quickly
- Providing an additional gate pitch option for higher drive current in certain chip functions that require the utmost performance
- Using a novel thin barrier to reduce via resistance by 30% and enhance interconnect performance
- Delivering a 5x increase in capacitance within the same footprint when compared to industry standard, driving a voltage droop reduction that translates to dramatically improved product performance. The technology is enabled by a new class of “Hi-K” dielectric materials, stacked in ultra-thin layers just several angstroms thick to form a repeating “super lattice” structure. This is an industry-first technology that is ahead of current capabilities of other manufacturers

Tiger Lake will be Intel's first CPU architecture to utilise 10nm SUperFin transistors, allowing Intel to use transistor-level and architectural improvements to deliver incredible boosts in both performance and efficiency over today's Ice Lake processors.

Intel has confirmed that an Enhanced SuperFin technology is in the works to offer further performance gains to future 10nm products. Intel has also confirmed that they are moving away from its 1xnm ++ naming convention, as the company has found it to be confusing to both consumers and their employees. 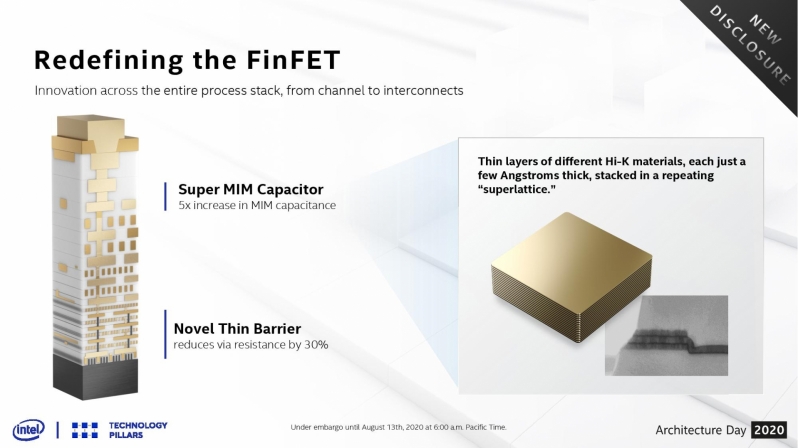 With 10nm SuperFin, Intel has delivered significant performance gains for their upcoming Tiger Lake processors, fascinating a resurgence within the mobile market for the technology giant. With a new core architecture and significant 10nm improvements, Intel will bring a new wave of competitive offerings to the notebook/laptop market, offering consumers significant increases in CPU and iGPU performance.

Moving forward, further 10nm enhancements should help Intel to continue delivering more performance to its customers. Even so, it is only a matter to time before Intel's rivals move to newer process nodes, which will deliver them similar, or stronger, performance advantages.

You can join the discussion on Intel's SuperFin 10nm process tech on the OC3D Forums. 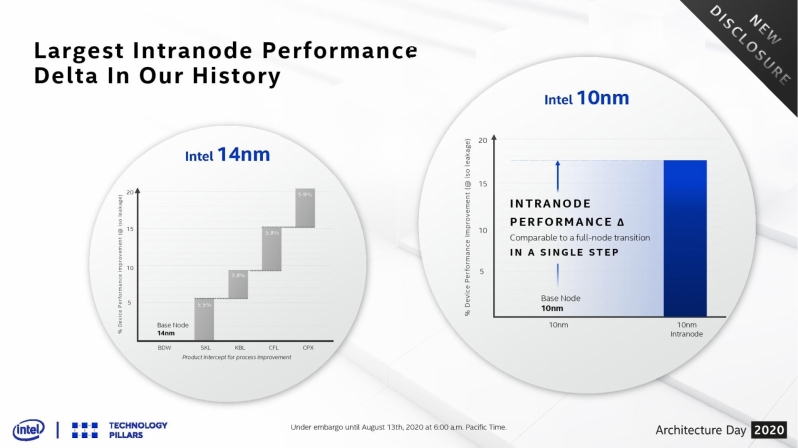 NeverBackDown
This is what we should have gotten a while ago. Innovation from Intel.

What is crazy to me is the fact that that new layer is a few angstorms "thick", 10⁻¹⁰ m; that is one ten-billionth of a metre, 0.1 nanometres. A few of those? Man that's thin!Quote

Warchild
I honestly couldnt care if we were stuck on 10nm for 10 years, as long as the next gen cpus released provided a reasonable upgrade path.

At the end of the day, I dont mind how its made. I just want it to work, and be far superior to what I have while not igniting in flames from heat.Quote

Kleptobot
Those Hi-K caps sound like magic, crazy stuff. And the via resistance reduction also very cool. Sounds like they should be able to produce some parts that can clock pretty highQuote
Reply