TSMC plans to avoid the 'cardinal sin' of chip production.

There have been a lot of rumours recently surrounding TSMC's manufacturing capabilities. Can they keep up with 7nm demand? Can they continue to shrink their transistors on time? And can TSMC keep up with the growth of companies like AMD?

In September, AMD hosted their EPYC Horizon Summit, which is also known as "Rome in Rome". Now, this presentation is available to view online, and there AMD's Mark Papermaster and TSMC's Godfrey Cheng both met on stage to discuss 7nm demand and the roadmaps of both TSMC and AMD.

During their presentation, Mark Papermaster said that "As CTO, I’m meeting with customers every week, and the question I get is: 'How is TSMC going to have the capacity to be able to deliver the volume when others at this technology node have run into challenges?'". The response from Cheng was swift, "In raw aggregate capacity".

TSMC is three times larger than its nearest rival, accounting for 50% of the foundry market. When it comes to manufacturing capabilities, TSMC has no rival. With this in mind, it is clear that TSMC is AMD's ideal partner for EPYC. If TSMC can't supply enough chips, no one can. 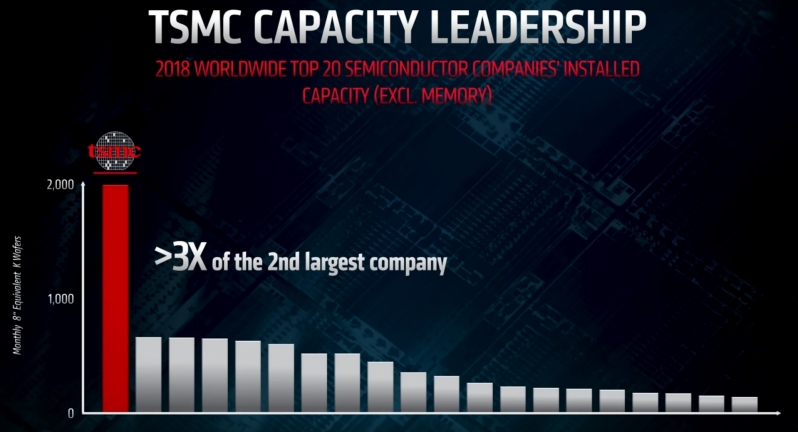 "Now, talk about raw capacity is not enough." Cheng later stated, "There’s another aspect of capacity, which is the technology ramp. And if you look at the ramp for the N7 node; you can see our N7 node has actually been very successful. Not only because it’s the most advanced node in the world, but we’ve been able to ramp it as quickly – actually better – than any other node in the history of TSMC."

That's right, 7nm is has been TSMC's fastest node ramp in history, placing the company in an ideal position to continue increasing their productivity. That said, AMD isn't TSMC's only 7nm customer, with Apple being one of TSMC's other major 7nm customers.

TSMC's Godfrey Cheng also highlighted by TSMC's fast ramp is important for the industry. "The reason why the ramp is such a critical element of a product is that with any product there is a life cycle." Cheng says, "If you cannot deliver a product within a certain timeframe where the demand is hot, we commit the cardinal sin of actually leaving demand on the table, and that’s not what we do."

When it comes to 7nm, TSMC plans to leave no demand on the table. Supply constraints will lead to reduced confidence in TSMC, lower profits and give their customers more reasons to work with their competitors. These supply constraints could also place companies like AMD in an uncomfortable position, where their supply of processors could fail to meet the demands of customers.

TSMC plans to grow in the coming years, and AMD's growth as a significant CPU and GPU supplier will have a huge role to play in that. TSMC is also likely to manufacture the chips behind both next-generation consoles, giving them more reason to ensure that their 7nm nodes meet their capacity requirements. 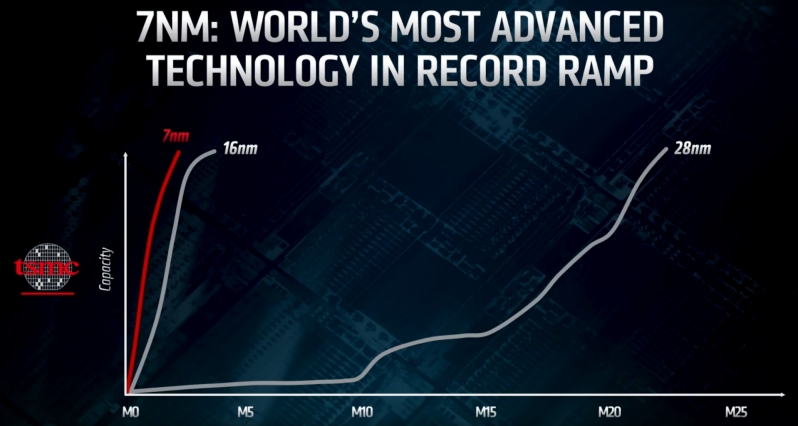 Another interesting thing to note is that TSMC is now using AMD EPYC processors in its own datacenter. This makes TSMC both a supplier and a customer of AMD. While TSMC's demands for CPUs are small for a company like AMD, it highlights how important AMD is as a customer, as both AMD and TSMC will be relying on each other to continue growing in the coming years.

You can join the discussion on TSMC's plans to keep up with 7nm demand on the OC3D Forums.