Posters on the MATLAB subreddit have made a remarkable discovery, uncovering an issue which has negatively impacted Ryzen's CPU performance since its launch in 2017. an issue which is one simple optimisation away from delivering greatly enhanced performance across most workloads.

nedflanders1976 has released a guide which helps users force MATLAB into AVX2 mode when using AMD's Ryzen processors. Using this fix, Ryzen CPU users can achieve performance boosts as high as 300% in some workloads. This means that MATLAB is one simple optimisation away from incredible Ryzen performance.

Legit Reviews has tested AMD's new Ryzen Threadripper 3970X across a variety of workloads within Matlab, finding that the change yields significant performance boosts across a wide range of workloads. Legit Reviews has also claimed that Intel recommended MATLAB as a potential benchmark for their latest product reviews, clearly because it highlights a performance advantage that Intel processes. It is likely that Intel is unaware of AMD Ryzen processors being forced onto an inefficient code path.

We will include the graph below from Legit Reviews for illustration purposes, though we will not that they also include i9-10980XE results within their own analysis. We advise our readers to have a look at Legit Reviews full analysis of AMD's MATLAB performance. 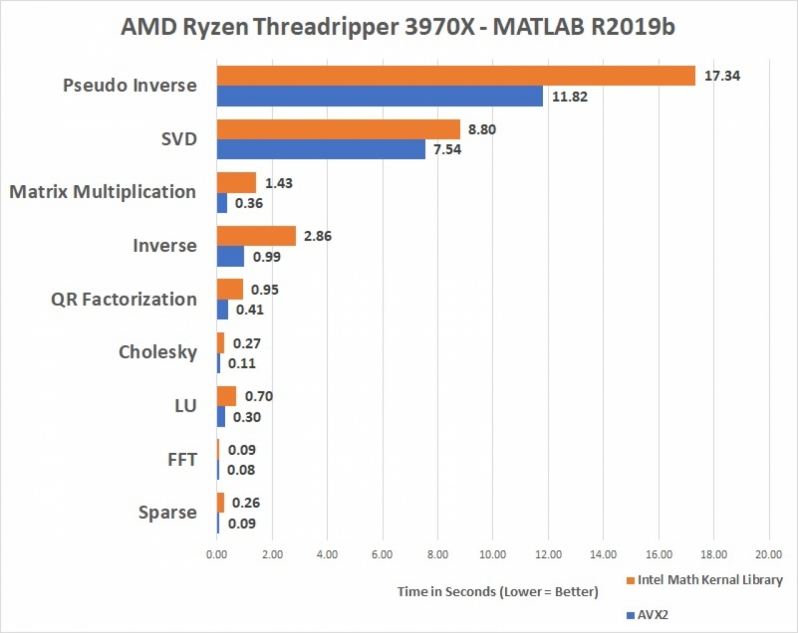 MATLAB is a popular tool for complex numerical computing. Most universities use it for a variety of reasons. Even I have used the toolset during my time at University.

MathWorks, the developers of MATLAB, need to work to ensure that its toolset is optimised for the latest processors from both AMD and Intel, as at the very least it will help ensure that their end-users can achieve the highest performance levels. Ryzen processors have been available for almost three years now, leaving little excuse for such an easy optimisation going unutilised.

You can join the discussion on the simple optimisation that turbocharges AMD Ryzen's MATLAB performance on the OC3D Forums.