If you haven't already, please read our review for AMD's Ryzen 7 3700X and Ryzen 9 3900X, as much of this article is based on our thoughts on the Zen 2 architecture and AMD's innovative multi-die solution to CPU scaling.

With Zen 2, AMD has moved away from the multi-die approach of their 1st/2nd Threadripper and 1st Generation EPYC processors, moving I/O connectivity and their memory controller to a single chip that remains separated from the company's main CPU dies. Before Zen 2, AMD's Threadripper and EPYC processors had their I/O and memory controllers split between each processor die, adding additional latency into the mix when CPU cores need data from the memory and the I/O devices that are connected to other chips, resulting in odd performance characteristics on AMD's server and HEDT platforms.

While AMD's original Threadripper and EPYC series processors are capable units, they present PC users with a myriad of problems which can result in degraded performance in some scenarios. Just have a look at the Sony Vegas Video Rendering section of our Ryzen 3rd Generation 3700X/3900X review for context. Sometimes, AMD's 1st/2nd generation Threadripper processor didn't perform as well as a CPU with that core count should, and that's what AMD hopes to address with Zen 2.

With Zen 2 AMD has proved that a multi-die processor is possible with minimal downsides. We have found no workloads where AMD's Zen 2 processors perform worse than their single-die Ryzen 2nd Gen counterparts, showcasing the power of AMD's latest designs. With Ryzen 3rd Generation Threadripper, these gains will be amplified, as AMD will have addressed the main criticisms of Threadripper in one fell swoop by delivering what's effectively a beefed up version of the company's AM4 Zen 2 offerings.

Unlike AMD's existing Threadripper processors, Ryzen 3rd Generation/Zen 2 Threadripper will utilise a single, unified memory controller on a separate I/O/memory die, just like what AMD has shown with their Zen 2 EPYC processor. This will enable AMD to deliver a true quad-channel memory setup with identical memory access latencies to all CPU cores, something that's impossible on AMD's previous multi-memory controller solution. This addresses the memory access issues which have plagued Threadripper systems, making Threadripper exactly what it should be, a bigger version of AMD's AM4 offerings that present no major performance downsides. 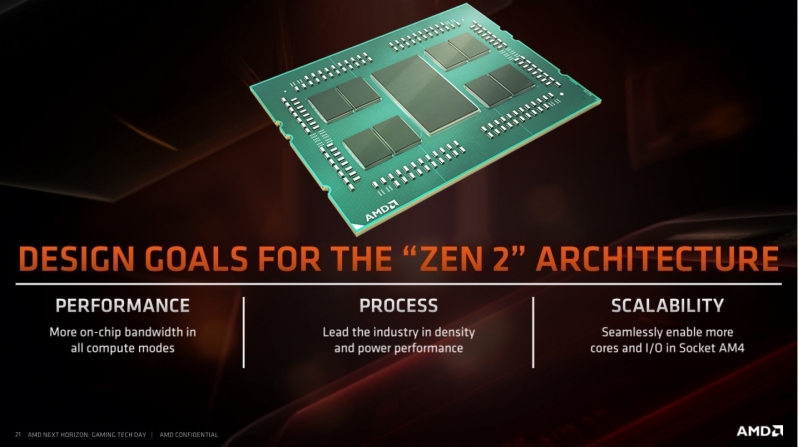 (Not an official AMD Slide)

While this article is mostly based on our knowledge of Zen 2, it is hard to deny that AMD's architectural shifts will enable the company to create some incredible HEDT systems moving forward, so much so that it is difficult to see how Intel can respond to the coming onslaught, at least in the short term.

AMD's multi-die approach to CPUs has borne great fruit with their Zen 2 based Ryzen 3000 series processors, and that march will undoubtedly continue with the company's future Threadripper offerings. Be prepared for a massive shift in the HEDT market, as Threadripper 3rd Gen is set to deliver an insane generational leap over its predecessors.

You can join the discussion on AMD's Ryzen 3rd Generation processors pointing towards incredible Threadripper offerings on the OC3D Forums.

demonking
I was thinking about this last night. Intel should be extremely worried about their future Xeon line up.
Companies like HP,Dell ect that are in the pre-built server market and stackable server businesses will be looking very closely at the next TR processors. if you are buying 1000's of CPU's, each with more potential performance than intel, more cores, and in general much higher ceilings in most aspects, and cost less (significantly in some cases) why on earth would you stay on the intel platform exclusively? in fact other than some minor software work arounds why would you stay with intel at all?
This is yet to be seen but these companies are all looking at numbers on spreadsheets. How much do they cost, how much is it going to cost to move to the platform and how much more profit can we expect and don't give a monkeys about anything else. Although still speculation, the view is that this will most likely be going on in board rooms as we speak or as soon as these OE's have access to the data sheets/ engineering samples.
an Intel W-3175X 28 cores on OC's for £2789
a TR 2990x is over £1000 cheaper and this gap will only widen on 7nm TR.
Intel may well have been caught properly with their pants down but we will have to seeQuote
Reply