Is this score too good to be true?

There has been a lot of controversy lately surrounding AMD's Ryzen Threadripper platform, igniting rumours regarding the potential Threadripper killing capabilities of the company's upcoming Ryzen 3rd Generation processors.

As some of you may already know, AMD removed Ryzen 3rd Generation Threadripper from their 2019 client roadmap, a move which has been analysed to death by enthusiasts and fanboys from every side of the hardware spectrum. Does AMD not have access to enough 7nm silicon for Threadripper, does AMD thing Threadripper will eat into their EPYC sales, did AMD simply decide not to include Threadripper (a late 2019 product) in a slide about 2019 client system sales? Who knows.

To add more to this topic, Forbes has managed to find a Cinebench R15 score for a Ryzen 3rd Generation 16-core processor, which allegedly ran at 4.2GHz and offered a score of a staggering 4278 in the multi-threaded benchmark. This is enough to beat AMD's 24-core Ryzen Threadripper 2970WX at stock clocks, which is an insane feat for an AM4-based CPU with eight fewer cores.

This information leak comes via AdoredTV, with Forbes creating the graph below. 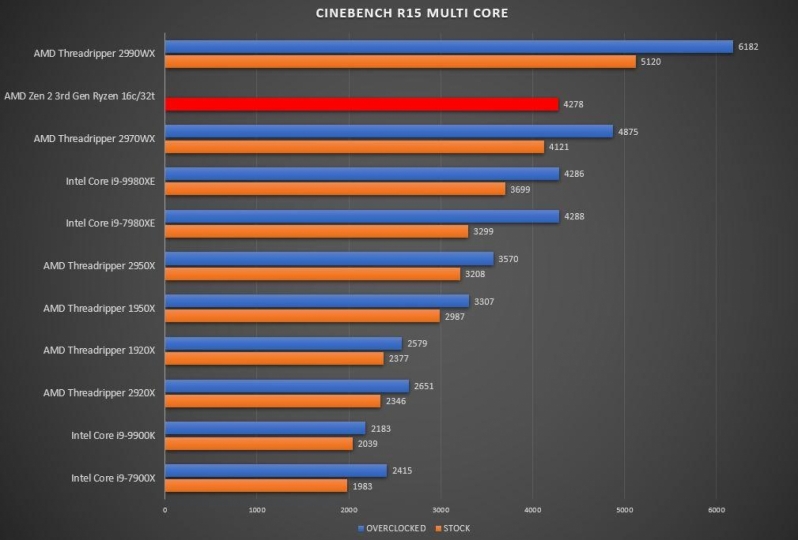 If this information is correct, AMD's Ryzen 3rd Generation 16 core processors will offer a performance lead of around 1,000 points over the company's existing 16-core Ryzen Threadripper 2950X, packing a performance boost that is close to 30%. That said, it is unknown what the stock performance of AMD's AM4 16-core will be, as it is possible that the processor was overclocked to a achieve these speeds. Even then, this assumes that this performance leak is legitimate, which it might not be.

This performance lead is much greater than what was showcased by AMD at CES 2019, where AMD showed that their next-generation Ryzen 8-core could match the performance of Intel's i9-9900K while consuming much less power. This demo was designed to put Intel on notice, as AMD undoubtedly left some performance on tap to showcase at later events.

AMD's Ryzen 3rd Generation processors are expected to offer a significant performance leap over their predecessors, but right now it remains to be seen how well AMD's next-generation processors will perform in reality. We will have to wait for AMD's official Computex reveal, and subsequent reviews before we know for sure.

You can join the discussion on AMD's alleged Ryzen 3rd Generation performance on the OC3D Forums.

AlienALX
LOL look at the CPUs it's on the same list as. That's nuts.

Avet
Quote:
Yes. But... That is only in rendering types of workload. For everything else Intel is better.

This is interesting because it shifts traditional concept of massive single workstation PC that you use for everything. Wendell (Level1), and Eposvox did a lot of testing, and recommend one PC for editing based on 9900K, or 9700K because it is snappy, has fluent workflow etc... And another based on Threadripper that you use only as a rendering station. This way you get the best from both worlds, and you don't need the fastest CPU on the planet because you loose editing time wile it renders. This gives you much more room for scaling your systems.

This is where dual system cases like Corsair 1000D come in. One Intel Z390 build for editing, general use, and a Threadripper monster just for rendering. Any content creator's wet dream system.

I think this is the way reviewers should approach this "new generation" of CPUs.Quote

tgrech
Quote:
Dual-mobo systems would likely become kinda redundant if these numbers are true(Since this would mean Threadripper has performance that matches Intel even in low core workloads). Essentially these are showing AMD matching Intel in IPC(Roughly same per core performance as the 9900K) in a benchmark that generally favours Intel. This would probably mean AMD surpassing Intel in a wider benchmark suite if true, unless the nature of Zen and its strong points has changed significantly.Quote

MiNo
Ooh, look at those cinebench scores! Said no gamer ever.


JK, awesome performance - but COME ON with some top shelf gaming stuff already. Please. Don't leave us alone with Intel and Nvidia.Quote

Avet
Quote:
The biggest limitation on Ryzen CPUs is their architecture. First of them frequency, and second latency. Even if you match the frequency Infinity fabric will still be way slower than Ring Bus, or Mesh Interconnect. And i don't see chiplet design reducing the latency. It may be the opposite. AMD compensates for this by offering more cores for lower price. If you have task that can be perfectly multithreaded (rendering) more cores beat frequency, and latency in most cases. Apart from rendering, pretty much all other tasks can't be spread perfectly to all cores. For anything that requires tasks to be competed in sequence Intel architecture wins. That is why Gaming, scrubbing in Premiere, Music production work much better on Intel. In this tasks with Threadripper, for example, you have bunch of cores waiting on each other, and for the most of the time doing nothing.

That is why two mid to high range systems which are tailored for tasks that they do best (editing Z390, rendering X399) can give you much better performance than a massive Intel W-3175X system that does both tasks really good.Quote
Reply