Clock speeds of up to 5GHz on Zen 2

Listings for AMD's Ryzen 3000 series processors have appeared on e-katalog, a Russian retailer, revealing what could be the specifications of AMD's upcoming Ryzen 3000 series lineup, which ranges from six-core offerings to 16-core products.

These listings come one week before AMD's CES 2019 keynote, where AMD is set to make some "exciting announcements" and discuss "next-generation" products. Right now it is unclear whether or not these specifications are true leaks or placeholder product listings.

On the high-end, these listing indicate that AMD will release a 16-core Ryzen 9 3800X processor which will offer a base clock speed of 3.9GHz and a boost clock speed of 4.7GHz, a full 400MHz boost over the Ryzen 2700X's boost clock while shipping with 2x as many cores and a TDP of 125W.

More interesting however is the 12-core Ryzen 7 3700X, which is said to ship with twelve cores and base/boost clock speeds of 4.2/5GHz. Yes, that's a boost clock of 5GHz on an AMD processor, which when combined with AMD's Zen 2 architecture should make a potent combination. 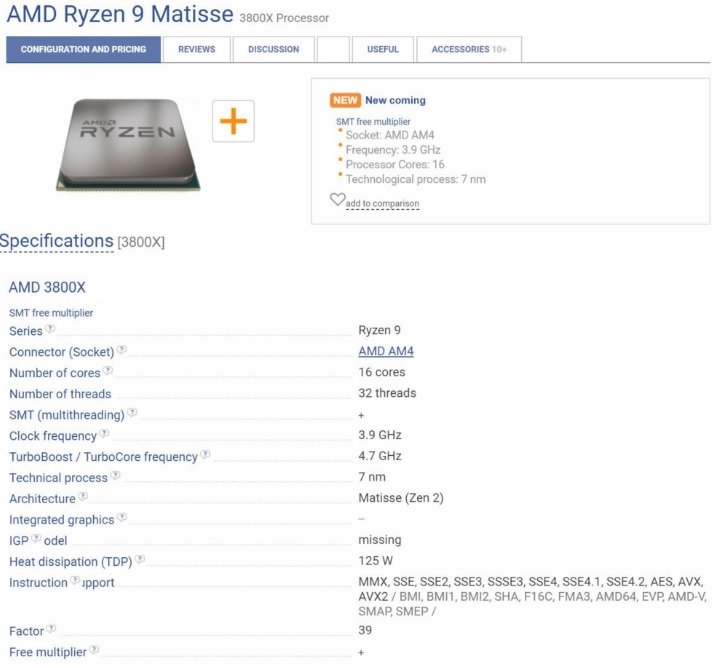 What is worth noting is that these specifications are identical to the specs that were leaked by AdoredTV last month (more info here), making it likely that these processor listings are placeholders. However, e-katalog didn't list every processor that AdoredTV leaked, including his rumoured 135W Ryzen 9 3850X flagship.

You can join the discussion on these leaked Ryzen 3000 series specifications on the OC3D Forums.

WYP
Quote:
If these specs are true, I'd be curious if the high-TDP models will be fully supported on all AM4 motherboards. It is possible that they would run in a lower power state depending on the motherboard.Quote

tolagarf
Quote:
What else would they use though? TR socket? Seems a bit odd if they didQuote

wozza365
Quote:
The TDPs on the leaks are pretty good. I think 1800X was also 125W? So I suspect they should run at least on more premium older boards like X370/X470 maybe B350/450 depending on the motherboard manufacturer.

For more detailed information on the latest Ryzen (and Navi) check out AdoredTV on YouTube. He had a 3850X that topped out at 5.1GHz, though it was expected to not be announced at CESQuote
Reply