Rumour has it that AMD's jumping to 5nm for Zen 3

That wasn't on AMD's roadmap...

Rumour has it that AMD's jumping to 5nm for Zen 3

If Digitimes is to be believed, AMD's going off-roadmap for its Ryzen 4000 series of Zen 3 processors by opting to use TSMC's 5nm process technology instead of their 7nm node.

This move would see AMD use a more advanced process technology than the company previously announced, granting the company smaller transistors, increased power efficiency and the potential to achieve higher CPU clock speeds. These advantages could push AMD's technology another leap ahead of Intel, who are already behind AMD when it comes to process tech.

AMD's Zen 3 processors are due to release before the end of 2020, though at this time it is unknown when these chips will reach the desktop processor market.

Digitimes has also reported that AMD is now considered a "tier one" customer for TSMC, granting the company priority access to TSMC's latest technologies. Following the cessation of all business with Huawei/HiSilicon, TSMC needs to fill any and all gaps within its production lines, and AMD appears to be ready to utilise any spare manufacturing capacity that TSMC has available.

What needs to be stressed here is that AMD's official roadmap marks Zen 3 as a 7nm architecture, but given today's circumstances, AMD may be prepared to take a risk with Zen 3 to push its advantages against Intel to new heights. Roadmaps are always subject to change, and we don't see AMD making a decision like this public before they are ready to launch processors. Why give Intel time to react?

It is also possible that 5nm will be reserved for specific Zen 3 CPU designs, such as future Ryzen Mobile products or other market niches where the benefits of 5nm manufacturing are strongest.

If AMD is manufacturing Zen 3 on 5nm, they will be able to push their power advantages against Intel to new heights, delivering industry-leading performance/watt characteristics within the x86 CPU market. 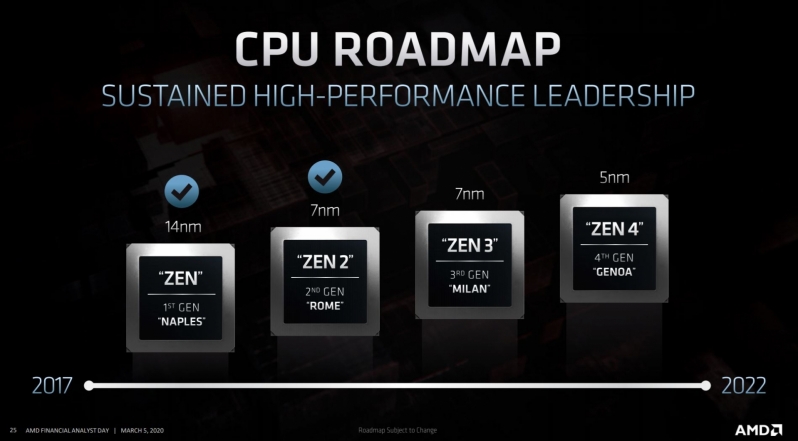 This is a rumour which we will take with a huge grain of salt, as while moving to 5nm could be hugely beneficial for AMD, going off-roadmap could cause unwanted delays at a time where AMD needs to execute. If this rumour is true, AMD has taken another considerable risk with Ryzen, but so far, all of AMD's risky moves with Zen have paid off handsomely.

You can join the discussion on AMD's Zen 3 processors reportedly jumping to 5nm on the OC3D Forums.

WYP
Quote:
Well, if the APUs are 7nm, that would make sense for the 5000 series. The APUs tend to be a generation behind.

AMD has already confirmed that Zen 4 will be on a 5nm node. That's on AMD's roadmap.

My gut feeling is that AMD isn't doing this, as they don't need to risk it beat Intel in a lot of markets. That said, with the Huawei situation, AMD has an opportunity to grab onto 5nm earlier to accelerate their roadmap.Quote

RobM
Intel are already dead in the water in terms of progression.
AMD will be doing this to strengthen their position in the marketplace and grow, they clearly know they cannot get away with Intel style upgrades.
These things will not be cheap mind, AMD do not want to be the "cheap option" anymore.Quote

Warchild
Quote:
They want to be the only option. So 5nm could be the jackpot of risks if its true and pays off. Enthusiasts are a 1% market for them I guess. Its all about servers, OEMs, etc.Quote

tgrech
Yeah I don't think there's enough evidence to give much weight to this rumour yet, especially given how long ago this change must have been decided. But given AMD's heavy use of HDL for their design(Tbf only Intel really don't use it at every level but for good reasons too) in theory it could have been possible without too many headaches if the design rules didn't vary much, particularly if they just updated the gate node and kept the spacing the same as 7nm(For heat dissipation reasons too, as with Zen+).Quote
Reply