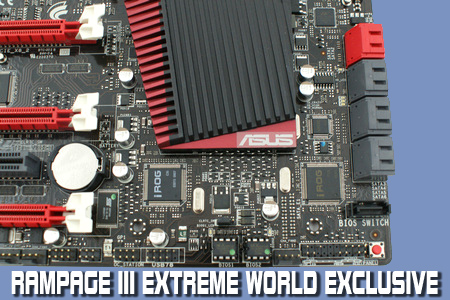 I'm sure by now you'll have heard that ASUS have updated their Republic of Gamers Rampage II Extreme , to the Rampage III Extreme. We've all been hotly anticipating it and recently we had a first look at the official ASUS photographs.

Today ASUS have finally released their official Press Release too giving us all the information we could ever need about what we can expect to see in a couple of months time.

For us here at Overclock3D.net though, frankly we're not interested in that official press release. Ok a bunch of sites will have it up or be putting it up and good for them. It's the hardware of the moment and they need all the help they can get.

Because we have it.

Presenting the First Rampage III Extreme in the World 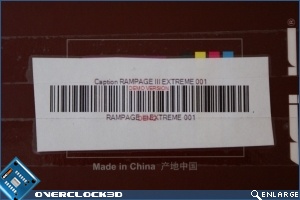 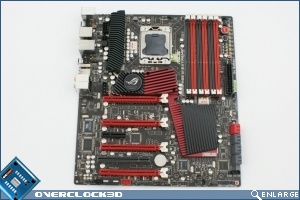 Having it here naturally leaves us with two choices. Do we :

a) Regurgitate the ASUS press release about how packed with the latest technology this board is and how you need it in your life?

b) Use that time towards benchmarking this puppy so we can have a full, hands-on, review for you to read on Friday?

Considering you know that as part of the Republic of Gamers brand this will do everything you can think of and some that you can't. Because it's not even out yet it will be stuffed to the gills with the latest technologies such as SATA6, USB3, ASUS ROG Connect for overclocking via another PC and chokes that can handle 40 amperes.

And because we love doing the voodoo that we do so well, we're going to concentrate on torturing this until it begs for mercy rather than make do with press releases.

To tide you over until Friday, keep a tissue handy because Tom has a video for you :

After that I think we all need a lie down. But we never rest here at OC3D so that you can.

Deshman
Go as in depth as is humanly possible, I want to know EVERYTHING about this board.. especially how it performs with a 980x

(from the repetitive asking of course!)Quote

alexhull24
Looks like a killer board, I have high expectations.

No idea how you managed to get Asus to send you one, nice work! I look forward to the review on friday.