An i3 with the core count of an i5

Intel's i3 branding has always been associated with value, offering strong single-threaded performance which is more than adequate for the needs of the majority of PC users, though things are starting to change in this regard.
Today applications are starting to become more multithreaded, with AMD, Intel's biggest rival, only offering their latest Ryzen 3 CPUs with a minimum of 4 CPU threads, signalling what could be the beginning of the end for dual-core CPUs.
With the incoming release of Coffee Lake, recent rumours suggest that Intel's i7 lineup will be moving from four cores and eight threads on desktop sockets to six cores and twelve threads, with i5 CPUs moving from quad core to hex core CPUs. This left the fast of the i3 unknown, at least until now.
This morning a post from the Anandtech forums has leaked specification for Intel's upcoming i3 8350K and i3 8100 CPUs, both of which offer four total CPU cores/threads and no core boost clock speeds. This effectively makes these new i3 CPUs last generation i5s without boost clock speeds.
The i3 8350K has a base clock speed of 4GHz while the i3 8100 has a base clock speed of 3.6GHz. Only the i3 8350K is overclockable. 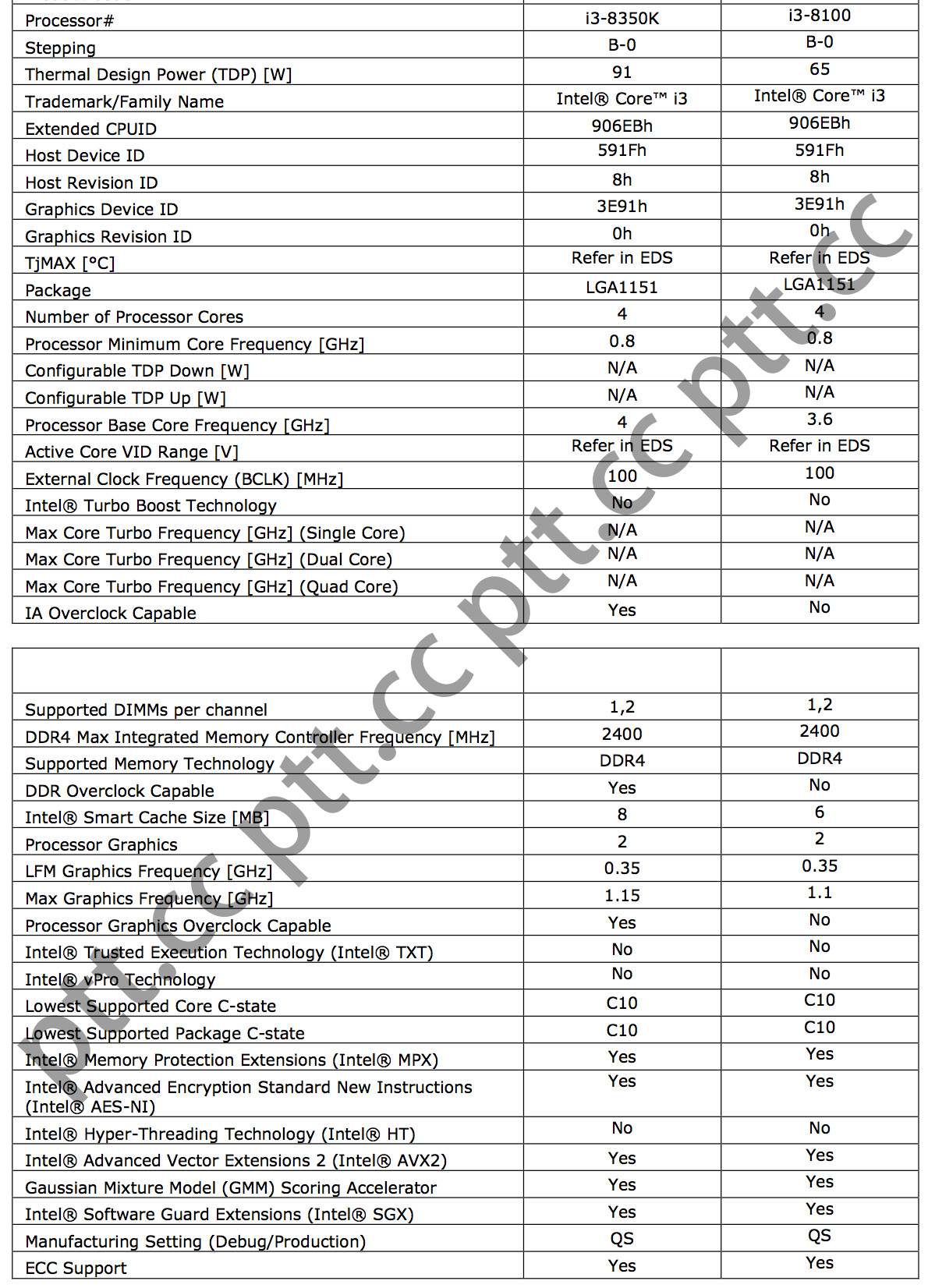 These rumours make a lot of sense, given AMD's 4-core, 4-thread Ryzen 3 offerings and Intel's rumoured move to 6 core CPUs on both their i5 and i7 series CPUs. At this time it is unknown how Intel will price their new i3 series CPUs, though prices are expected to be higher than Intel's current generation offerings.

Korreborg
well the same as always. Price will show if it's a good "comeback".Quote

TheF34RChannel
Quote:
Not everything is measured by price to everyone

wozza365
To me, this just shows that they've been purposely holding back their technology so that they can sell weaker stuff for more money. Only since Ryzen came around has there been any changes in number of cores in their lineup for 7+ years.

They don't deserve my money right now and won't for some time. At least in the GPU department Nvidia have been innovating at least a bit.Quote

AlienALX
Whoopdee do. I bet the K one costs what the old I5 k cost (£170+) so they haven't done anything apart from change the name. Even the fact they are selling a locked one just boils my p**s.Quote

Korreborg
Quote:
But a 8350k at 7350k price = Lower than a 1500x with probably better OC potential = Awesome. If they launch it at the i5 price = Giga fail.Quote
Reply