There are plenty of PC enthusiasts who are looking forward to seeing higher-core count CPUs hit the consumer market, be it for heavy video encoding, rendering and even video streaming. Yes, these CPUs will simply cost too much to be used by most consumers, though at a minimum these CPUs will be interesting in an academic sense.
Performance data from Geekbench has leaked for what is thought to be Intel's upcoming i9 7960X, which will come with 16 CPU cores and 32 threads and come with a listed base clock speed of 2.5GHz. To put this into perspective the i9 7920X is listed as having a base clock of 2.9GHz.
With a single-core score of over 5000, this CPU is expected to have a Turbo Boost 3.0 clock of over 4GHz, though at this time we cannot confirm whether or not this CPU is a final sample or an early production model. 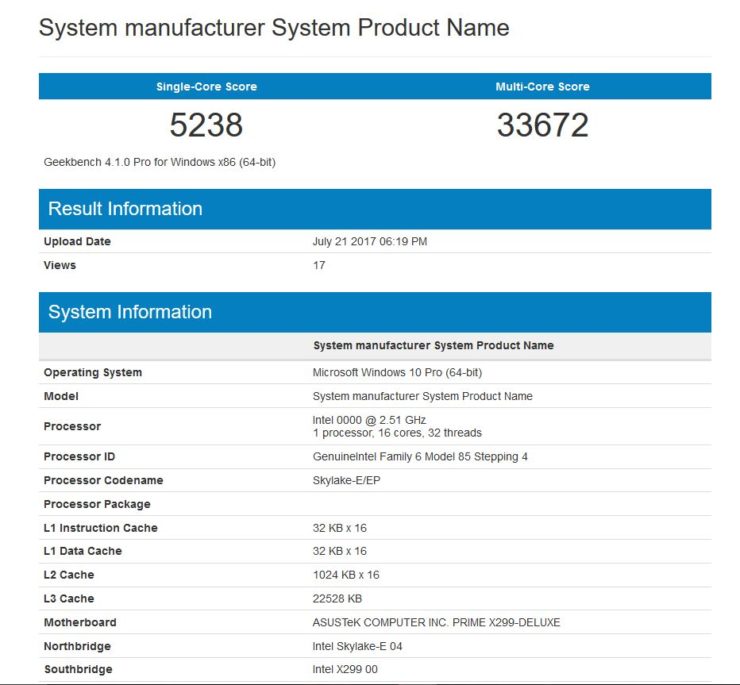 Comparing this CPU to AMD's Ryzen Threadripper 1950X and we can see that AMD will be offering a 3.4GHz base clock on their CPU, which should allow AMD's $999 CPU to easily compete with Intel's $1699 offering, though it is likely that Intel will offer more competitive single-threaded performance through turbo boost 3.0.

You can join the discussion on Intel's leaked i9 7960X performance data on the OC3D Forums.

AlienALX
I think this is only to meet certain TDP. I would imagine they clock like crazy.Quote

WYP
Quote:
Yeah, this is likely to maintain a low TDP. Even so, today's X299 motherboards were not designed with these core counts in mind, so super high overclocks could be problematic.Quote

NeverBackDown
Overclocking? Doubt it'll be much. The heat output on the higher core counts is going to be it's biggest issue. The voltages are probably going to act like an exponential function kinda like how Ivy Bridge was. Needed little voltage then going up 100mhz was all of a sudden a massive spike in temps, I know they are different as to why it spiked, just an example.Quote

AlienALX
Yeah you'll need a phase or two haha. My X99 Plus has 12, I would not want to push it tbh.

It's not going to be long before we are going to need proper active cooling on X299 either, especially if people want to push the clocks.

With all of these cores coming we may even see a form factor change eventually.Quote

Gothmoth
Quote:
having played with the current 8 core on intels latest x299 i doubt i want to try that.

ok there is still a little hope that they got rid of TIM.... but that´s just hope.

these days remind my about athlon XP and pentium 4.

i really would not have thought that intel can be so clueless.... again.
7 month ago i would have never thought i build myself an AMD system in 2017.

i don´t care about price that much... but heat, noise (need to get rid of the heat) and other things (intel continues to be a walletripper) made me buy AMD this time.Quote
Reply