Today marks AMD's 50th Anniversary, and to celebrate Overclockers UK and AMD have teamed up to give PC gamers some killer Ryzen and Radeon hardware deals, providing PC builders with a little more value for money from their purchases alongside AMD's already lucrative gaming bundles.

On the CPU-side we have some great deals on Ryzen 5/7 processors, with most of AMD's offers coming in the form of Ryzen/Radeon gaming bundles. On the pure CPU front, we have AMD's Ryzen 5 2600, which now casts £149.99 and ships with a free copies of World War Z and The Division 2 Gold Edition.

If you want to add some extra cooling potential into the mix, AMD's Ryzen 7 2700X now ships with Cooler Master's ML240R Liquid Cooler for £369.99, representing a £30 discount.

Over at team Radeon, AMD has a bunch of killer deals at a wide range of prices, including some offers that give Nvidia's GTX Turing series graphics cards a major run for their money. All of the graphics cards below ship with AMD's 50th Anniversary Game Bundle.

For starters we have AMD's Radeon RX 570 4GB, with both ASROCK and PowerColor offering models for £128.99, offering much more performance for your money than Nvidia's recently released GTX 1650.

On the higher-end, we have AMD's RX 580, which is priced similarly to Nvidia's premium GTX 1650 models. While the RX 580 will consume a lot more power, it will also deliver gamers a lot more performance. The 8GB frame buffer offered by these cards also represents a huge upgrade over Nvidia's offerings at this price point.

If you are looking for a new graphics for around £250, AMD's RX Vega 56 is a great option, delivering performance levels that are often similar to a GTX 1080 or an RTX 2060 while shipping for similar pricing to Nvidia's GTX 1660 Ti. Add in AMD's latest game bundle and you are on to a winner. Better still, Sapphire's dual-fan RX Vega 56 Pulse 8GB is now available for £248.99, moving away from reference-style blower coolers to something cooler and quieter.

On the high-end, we have AMD's Radeon VII graphics card, which currently ships for as little as £599.99. Not bad for a GPU that offers 16GB of VRAM.

One killer offer from AMD is the combination of their Rzyen 5 2600 and their Radeon RX 570, which currently ship for £268.98 when purchased together. This bundle is a great start for any PC gaming build, especially if you want to play any of AMD's bundled games. 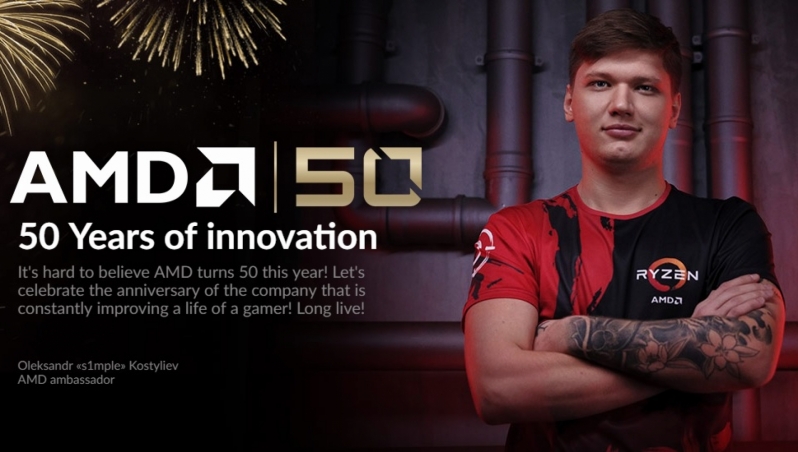 You can join the discussion on AMD's 50th Anniversary hardware offers on the OC3D Forums.

AlienALX
Such a shame Crossfire is dead. Man that would be a lot of performance for 500 large (Vega 56)Quote

Bartacus
Can you even do Crossfire on newer AMD GPUs?Quote

tgrech
Yep every modern AMD card technically supports Crossfire at a driver level including RVII. Just not much use for it.Quote

AlienALX
Aye since the advent of DX12 and proper DX12 games coming out no one has bothered with mGPU or whatever it's called at all. We're actually getting console games now, they're barely even 'ports'. I don't even think there is a single DX12 game that works with more than one GPU. I could be wrong about that, but the last time I checked was with two Fury X and it was an absolute nightmare. That was 2015? maybe early 2016. Hardly anything at that time worked with it then.. Wolfenstein - no multi GPU support at all. BLOPS III - support, but artefects everywhere, glitching, "hopping" and black screens. FO4 -

There was also the VRAM issue, and lots of black screens and lock ups because of it. I sold one of my Fury X very shortly afterward and would not touch either now.

I think it's safe for me to categorically say that unless consoles get more than one GPU? it's over. It has been for ages, too.Quote

tgrech
As far as I know there is, one, singular title that has DX12 mGPU support, and that's Civ6. I think Beyond Earth also applied the same concept via Mantle. This isn't AFR though, it's split-frame rendering, which is useful for a game like Civ, but would quickly fall apart if used for most traditional games particularly ones with fast moving/player following/first person/ect cameras.Quote
Reply