NZXT is ready for next-generation Intel

NZXT has confirmed that they have a Z590 version of their N7 motherboard in the works, revealing an image which suggests that the motherboard would feature more power phases than their N7 Z490.

Based on the image below, NZXT will also be reinforcing the top PCIe slot of their N7 Z590 motherboard, a move which will help increase the durability of their design, especially as graphics cards continue to increase in size and weight.

Sadly, NZXT has not released detailed specifications for their N7 Z590, and neither have they announced their hardware partner for N7 Z570 manufacturing. All we know is that NZXT plans to launch their N7 Z590 motherboard in April 2021.

When asked if they planned to launch an AM4 socket N7 motherboard, NZXT responded that they have "nothing to announce at the moment, but we're keeping an eye on all feedback!". Could we soon be seeing an X570 N7 motherboard?

NZXT will be releasing the N7 Z590 motherboard, supporting Intel’s latest chipset – which was announced today at CES. The N7 motherboard provides everything PC builders need to get the job done beautifully – from streamlined installation, to NZXT’s iconic cover design. We are excited to share more details as we get closer to the N7 Z590 launch in April 2021. 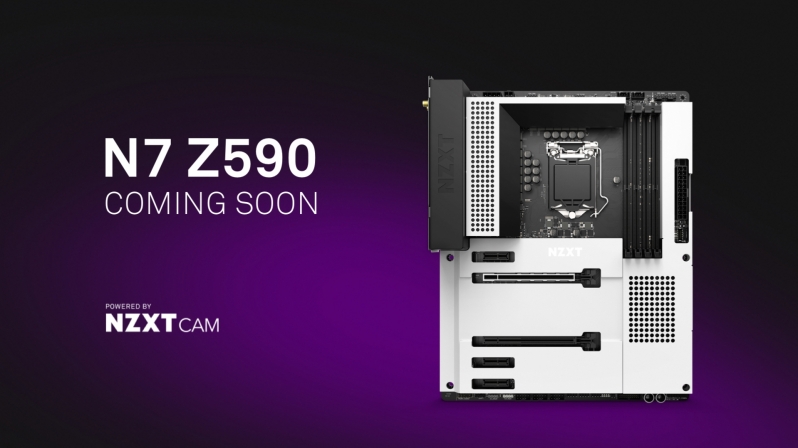 You can join the discussion on NZXT's N7 Z590 motherboard on the OC3D Forums.

Digikid
Actually surprised that NZXT is still trying to pass off these ugly, under-powered mobos. I know that they never get reviewed well and no one likes them...but you gotta give them points for persistence at the very least.Quote

Dicehunter
I like the look of these, Just a shame the bios is terrible and the power delivery is crap.Quote

FTLN
They were made by Asrock...
No wonder they are crap, Asrock didnt want any competition..........Quote

tgrech
I think they look quite nice, especially the matte black, and they're about as well spec'd and price tier'd around what I'd usually buy (Don't need many bells and whistles), if they made them for Ryzen and at Ryzen motherboard prices I'd definitely consider them myself.Quote
Reply