It now looks like AMD will be releasing 6-core AMD Ryzen CPUs, despite recent rumours to the contrary. These rumours can into being after it was questioned whether or not AMD had the ability to disable separate systems within their "Zen" Quad core module without impacting the system's shared L3 cache.

Now several sources have released some new information, stating that their inside sources have confirmed that 6-core Ryzen CPUs will be created, leaving no gaps between AMD's quad-core and oct-core CPU lineups.

Below is a quote from IO-Tech, which states that AMD can disable separate CPU cores from their quad-core clusters, without negatively affecting shared elements like L3 cache.

We have confirmed from our sources that AMD’s upcoming Ryzen processor can be technically configured as 6-core model. It is possible to disable each CPU core separately together with dedicated L2 cache from CCX without affecting shared L3 cache. Possible L3 cache configurations are 1/1 (8 MB), 1/2 (4 MB) or completely disabled. Basic rule is that both CCXs should have similar CPU core and L3 configuration for example both should have 3 cores and full 8 MB L3 cache enabled (6C & 16 MB L3). 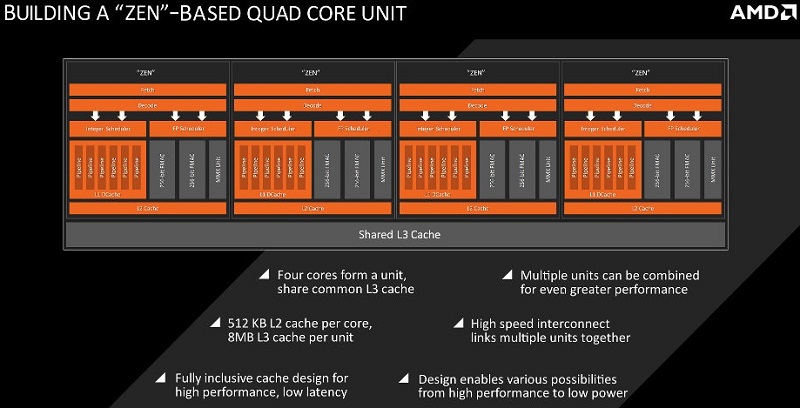 This type of core architecture makes a lot of sense for AMD, as the inability to disable separate sections of their Zen 4-core modules would severely limit AMD's ability to make a large range of SKUs, especially for the mobile market.

When AMD releases their Raven Ridge series of APUs, 2-core models will be important for the basic notebook market, with 6-cores being useful for future high-end desktop platforms.

You can join the discussion on AMD's Ryzen CPU lineup on the OC3D Forums.

AlienALX
Yeah that's always the issue when it's just a rumour and didn't come from the company themselves.Quote

Wraith
This will make Kilbane delirious

Shingara
I always sensed they were going todo 8/16 binned, 8/16 normal, 6/12 binned and 6/12 normal and then just have the apus as 4-6 cores with smt and the gpu bolted on. Letting the apus take the bottom end of ryzen.Quote

AlienALX
I wonder if you can unlock them this time around ?

RobM
still rumour though until AMD actually step up and announce it.Quote
Reply