Threadripper with support for 8 memory channels?

With their next-generation Threadripper processors, AMD is aiming high by focusing on both the Workstation and High-End Desktop (HEDT) separately with distinct processor chipsets and features. Leaked data to Gamers Nexus has suggested that two main designs for Threadripper will be available, with an sTRX4 HEDT platform and an sWRX8 Workstation platform.

If these leaks are correct, AMD's sTRX4 HEDT platform will offer similar features to existing TR4 series motherboards. sTRX4 packs support for four memory channels, 64 PCIe lanes (with PCIe 4.0 support this generation), and support for overclocking. In contrast, AMD's sWRX8 Workstation platform will feature support for 8-channel DDR4 memory, between 96 and 128 PCIe lanes and support for DDR4 RDIMM and LRDIMM DDR4 modules.
In effect, sWRX8 seems like a budget-oriented version of EPYC, while sTRX4 appears to be an upgraded version of AMD's existing TR4 platform. Both platforms will support single-socket CPUs, and at this time the core/thread counts of AMD's upcoming Ryzen 3rd Generation Threadripper processors are unknown.

Previous rumours have suggested that AMD is also planning to release an sTRX8 HEDT chipset. This chipset/platform is said to offer support for 8-channel memory like AMD's rumoured xWRX8 chipset while also retaining support for CPU overclocking. This chipset isn't mentioned in Gamers Nexus' data, which is available below. 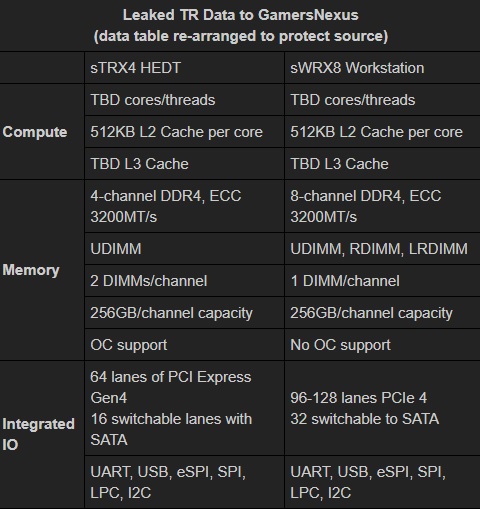 With Threadripper, AMD is now targetting both the high-end consumer market and enterprise-grade workstations, both of which are markets which promise high product margins. Moving further into this space will also help to place AMD into the minds of enterprise customers, cementing their position as a fully-fledged competitor to Intel.

You can join the discussion on AMD's Rumoured Ryzen Threadripper sTR4X and sWRX8 platforms on the OC3D Forums.