AMD's CES 2019 demo for Ryzen 3rd Generation was an impressive one, surpassing Intel's i9-9900K while consuming around 30% less power with the same number of active cores and threads. Better still was AMD's chip reveal, which showcased the potential of a high-end 16-core model of AM4, bringing AMD's mainstream core counts to the next level.

Now, rumour has it that AMD discussed their Zen 2/Ryzen 3rd Generation processors in detail at a recent event in Toronto, with YouTuber DannyzPlays reporting on the action.

Citing an unknown source, the YouTuber commented on the potential performance levels of AMD's Ryzen 3rd Generation processors, claiming that AMD's CES Demo was power limited by 30-40%, giving AMD enough performance to best Intel's i9-9900K while offering levels of power efficiency that showcased the benefits of TSMC's 7nm process node. If this claim is true, AMD left a lot of Zen 2's performance on tap, making it possible that Zen 2 will offer a lot more performance than their CES demo implies.

Strangely, AMD was also reported as saying that B450, X370 and X470 will support AMD's Ryzen 3rd Generation processors, with lower-end B350 processors being left behind. While AMD has claimed that AM4 will support new Ryzen processors until 2020, the company never specified which chipsets this applied to, so skipping Ryzen 3rd Gen BIOS updates for B350 isn't exactly out of the question. Even so, this move would cause a consumer backlash, as AM4 motherboard owners were promised compatibility with newer Ryzen processors.

We believe that it is more likely that B350 will either have Ryzen 3rd Gen support left to the discretion of motherboard manufacturers or be restricted to specific Ryzen 3rd Generation SKUs. Perhaps some 300-series motherboards won't be good enough for Ryzen 3rd Gen's highest TDP offerings, or ship with some restrictions. Dropping Ryzen 3rd Gen support on B350 would be seen as a massive backtrack on the company's AM4 commitments, so please take this specific rumour with a grain of salt. 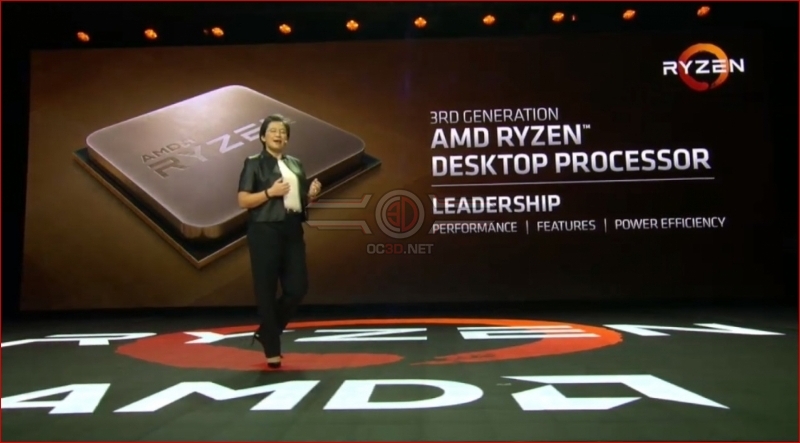 Elsewhere in the video, it is also claimed that Ryzen 3rd Generation processors will also boast increased memory compatibility, which is great news for AMD. Hopefully, this also means that higher-speed DDR4 memory will also be exploitable on AM4, with both Ryzen 1st and 2nd Gen processors failing to reach much higher than 3200MHz in most cases.

The video also re-iterates that AMD plans to release their Ryzen 3rd Generation processors in the second half of 2019, which lines up with AMD's mid-2019 launch schedule. Should we expect a product launch in July?

You can join the discussion on AMD's Ryzen 3rd Generation processors on the OC3D Forums.

demonking
It's quite unusual for either side to play koi about how good their next gen parts perform.
But if this is true it would be a great ploy for amd. Let Intel think they have nothing to worry about and then hit them hard on release. Let's hope, I expect a few more leaks in the near future once oems start getting their hands on es'Quote

tgrech
Yeah usually the idealised scenario for clocks vs power is a square/power of two relationship, so you need about double the power for around 40% (sqrt(2)=~1.41) clock speed increase, which you can roughly see across most product stacks with multiple TDPs on the same chip or when overclocking, so ideally 30-40% extra power would deliver 14-18% higher clock speeds, but of course there other factors at play that could push that either way a bit.

Showing off the better efficiency of what I think we can assume is about a 60W TDP model I'd guess is obviously much more impressive but of course AMD has no reason not to stick with at least a 90W TDP for their high end parts, obviously for the single chiplet parts at least.Quote
Reply