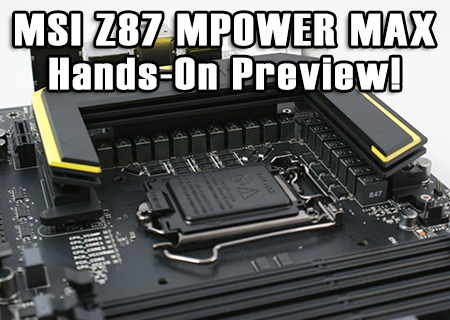 Today we give a quick once over to one of MSI's top end motherboards that will be reaching the shelves sometime soon. The MPOWER MAX is a new edition to MSI's lineup, building on the foundations left by last generation's Z77 MPOWER board - a motherboard that was rated extremely highly here at OC3D.

Following on from its predecessor, the MPOWER MAX sports the same yellow and black colour scheme that inspired many to build "Bumblebee" rigs. Unlike the rest of MSI's motherboards, the PCB used on the MPOWER range is a 'true' black, using a matte coating which hides the copper traces from view. This is certainly viewed as a good thing for those of us who value aesthetics, as the board shall not look brown under direct light.

Let us all have a look at some photos of the 'MAX before we get to the video preview. 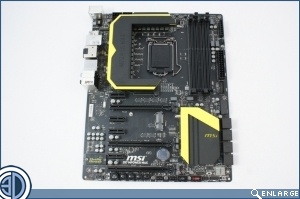 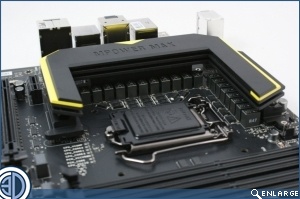 A look at the whole board as well as a close up of the CPU socket area. 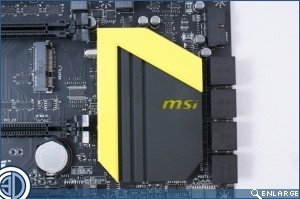 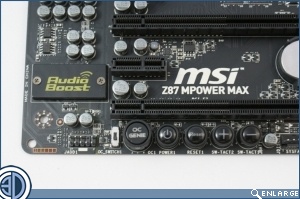 The black and yellow theme holds true on the chipset heatsink, while you can see the MAX's onboard audio components on the bottom left hand side of the board. 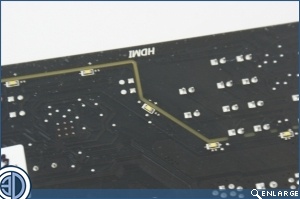 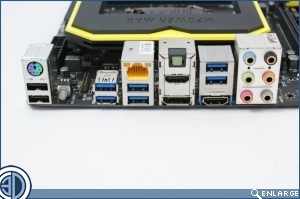 More audio related components with the left hand side photo, where you can clearly see a yellow line separating the audio circuitry from the rest of the PCB to improve quality. The rear IO panel can also be seen on the right.

From what we can see of the MPOWER MAX it should definitely live up to its predecessor's name. The older Z77 MPOWER board had some of the best features, performance and overclocking ability on any Z77 motherboard, let alone for anything around its price point. We can only hope that the MPOWER MAX can follow suit.

Taking a look at the area around the CPU socket shows a giant all-in-one heatsink to keep all the power phases and VRMs cool. Although the heatsink may look a little oversized, the MAX has a lot, and we mean a LOT, of power phases. Combine these with the two 8-pin CPU power connectors at the top, and the way that MSI put their MPOWER motherboards through an extensive overclock stability program, we should have a contender for the one of the best overclocking boards we've seen so far.

Looking down on the PCIe lanes we can see that the three full sized lanes are wired for 16x, 8x, 8x, and that there are also three 1x slots. We must stress that we have no idea how the bandwidth shall be shared when the lanes are laden with video cards.
You can also see that this board comes with 8 SATA ports which should be enough for most users out there when it comes to storage devices.

Again, and much like we've seen on the new Gigabyte Boards, MSI are now paying more attention to components which ensure a higher quality of audio reproduction. The MPOWER MAX sports upgraded capacitors as well as a separated PCB for the audio circuitry, stopping any electrical interference from the rest of the board from degrading your audio experience. Oh, and the line that separates the PCBs? It lights up yellow to keep with the overall colour scheme, and it looks great.

For as long as this board comes in at a decent price point we see no reason why this won't be one of the top sellers of the new generation. The board looks to be extremely overclocking capable, with a better than standard audio solution, and a great colour scheme. We look forward to testing this properly in the future to see if our predictions are true!

A big thanks to MSI for sending us this board for our hands-on preview. Discuss this topic further in the OC3D Forums.

NeverBackDown
I really like the very solid black PCB on this board. Hides all the electrical wiring which IMO is ugly

Only thing i don't like about this board is the color yellow. Wish they had a blue or white variant though... IMO it would sell a lot more.Quote

seumasbeathan
Interesting, I can't decide whether I love the yellow or hate it :P nice write up though

AverageNinja
Don't like that heatsink at all! The Z77 MPower looks a lot better IMO. And you can paint the Z77, which is a plus

FTLN
Nice Preview, would be nice to see some real time voltage monitoring lcd on some of these top end board's though

The Orange One
I love the look of that board! Looks like that will be the one i'll be using for my Haswell build!Quote
Reply