With the release of AMD's X570 platform, MSI seeks to create another God-tier motherboard offering for their fanbase, one which will offer features that have never been seen before.

On this board, MSI has opted to give their users access to four PCIe 4.0 16x slots, three PCIe 4.0 Lightning M.2 Gan 3 slots and two add-on devices which will give the motherboard an even more impressive feature set. Inside the MSI MEG X570 GODLIKE's packaging lies a PCIe M.2 Xpander-Z dual M.2 card as well as a 10B Super LAN adapter, enabling users of the X570 GODLIKE to add two additional M.2 SSDs to the motherboard and support for 10Gb Ethernet. 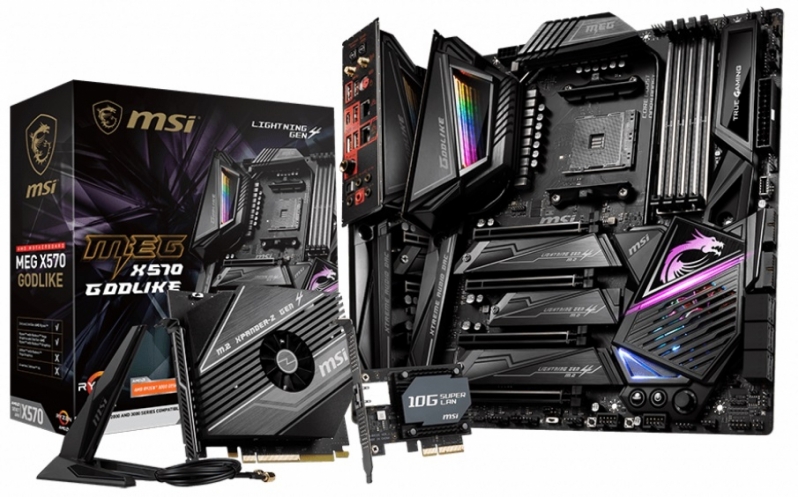 At this time the pricing of MSI's MEG X570 GODLIKEmotherboard is unknown, though it is likely to release on the same day as AMD's Ryzen 3000 series processors, which launch on July 7th, 2019.

You can join the discussion on MSI's MEG X570 GODLIKE on the OC3D Forums.

NeverBackDown
All that PCIe 4.0 just means they must have a couple extra controllers on board to support each one at x16 lanesQuote

Excalabur50
This board is a total beast instead of the six layer PCB of their other boards this one has eight, to enable cleaner signals for the PCIe 4.0Quote

FTLN
Nice, very very nice, but I bet it costs the best part of a grand ! !Quote
Reply