Leaks for AMD's TRX40 platform are coming quick and fast, with MSI being the latest motherboard manufacturer to have images of its next-generation Threadripper motherboards appear online.

MSI's TRX40 Pro WiFi and TRX40 Pro 10G have appeared online, with the images above and below coming via @KOMACHI_ENSAKA over on Twitter. Like other leaked TRX40 motherboards, MSI's offerings appear to utilise quad-channel memory in a 2 DIMMs per channel configuration and use some heavy VRM heatsinks.

Like other leaked TRX40 motherboards, MSI's offering also utilises a chipset fan for enhanced cooling, suggesting that these motherboards support PCIe 4.0, much like most of AMD's X570 motherboards.

What differentiates the TRX40 Pro WiFi and TRX40 Pro 10G are their internet connectivity options, with the WiFi featuring an integrated WiFi card while the 10G features a 10Gb Ethernet add-on card. Not many workstation users will require both WiFi and 10Gb ethernet, making this a great differentiating factor between these two motherboards.

At this time the pricing of these motherboards and their release date remain unknown. We will keep you updated as we learn more about AMD's next-generation Threadripper platform. 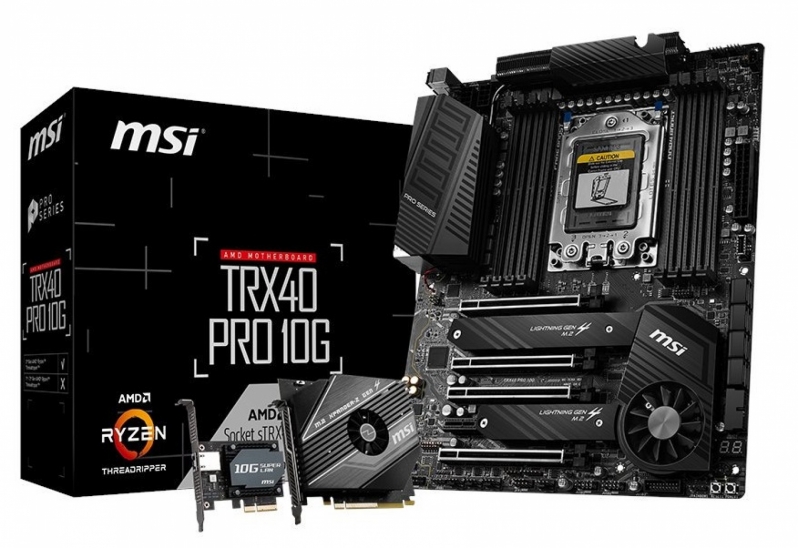 You can join the discussion on MSI's first TRX40 motherboards on the OC3D Forums.

g0ggles1994
Now this is more like it! But active cooling chipset again? DamnQuote

Darkdayzzz
Quote:
To be honest - this is meant for server grade setups. You hear nothing but fans in a server room lol.


As for a normal consumer buying this and a TR - if you don't hear the little fan and it is quiet then awesome and who cares if it is there! Also most people have headphones on / earbuds in half the time (or more) anyway so we wouldn't hear it.Quote

AlienALX
That fan looks larger than the usual. Hopefully it will keep the noise down.

Overall? crikey, I think I am clairvoyant. The last time they launched a board I said something along the lines of "Remove the ghey dragon and the stupid writing on the IO and just leave Lightning on there" it's like they read my mind.

Why did they make such a sexy HEDT board, yet on the cheaper ones they add the tat? that makes no sense to me. It's not like it costs less to remove all of that crap they splatter all over their boards, FFS.Quote
Reply