MSI's B450 TOMAHAWK appears at retail

Is the launch of B450 imminent?

MSI's B450 TOMAHAWK appears at retail

A large portion of PC builders appreciates the concept of value for money, hoping to maximise their PC's performance while minimising its cost to deliver a high-performance gaming experience while not breaking the bank.

On the AMD side, the value kings of their 300-series motherboards were their B350 models, which offered features like overclocking support and everything else that the average gamer required. Yes, high-cost X370 boards could provide more USB ports, SATA ports and some other advanced features, but more often than not these add-ons are not needed by end users.

AMD's B450 chipset is designed to succeed B350, offering enhanced designs to deliver increased memory performance and other useful design tweaks. These new motherboards will also feature out of the box support for Ryzen 2000 series processors which is not guaranteed on B350 boards.

MSI's upcoming B450 Tomahawk motherboard has appeared on Amazon US, showcasing multiple design changes when compared to the company's last-generation B350 Tomahawk motherboard. These changes include modified heatsink designs with more surface area, as well as listed support for up to 3466MHz memory in A-XMP OC mode.

The B350 TOMAHAWK from MSI earned both an OC3D Gamers choice award and an OC3D Value for Money Award, quickly becoming one of four favourite B350 motherboards in the early days of AMD's Ryzen series. 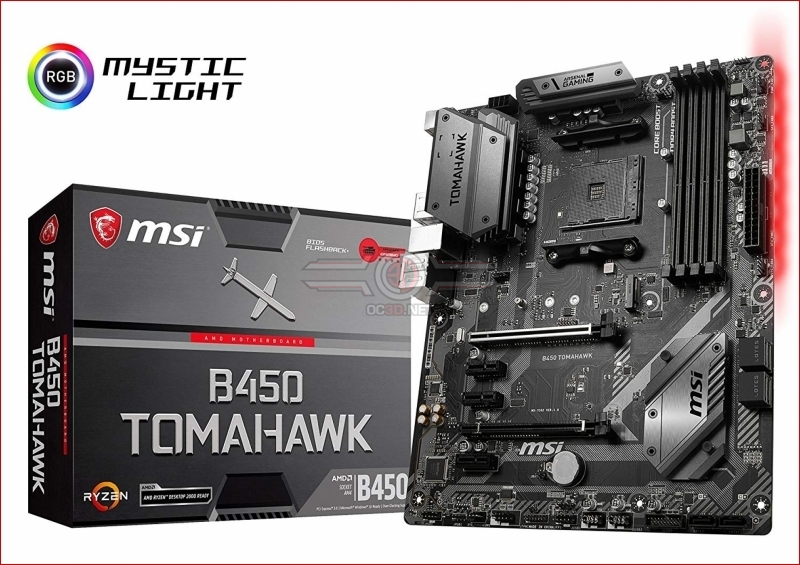 You can join the discussion on MSI's B450 TOMAHAWK motherboard on the OC3D Forums.

sheroo
I hope asus & msi come up with some matx boards as well, looking to replace my aging htpc with a ryzen igpu build. Want to have the ability to play 4k vids over hdmi 2.0Quote

Greenback
I'm sure the Artic version will soon follow

Emu
Now all I need is a release of the next gen GPUs to make a computer upgrade worthwhile.