The recent cryptocurrency mining craze has caused a large number of hardware shortages, especially in the GPU market.
Traditionally, coin miners would utilise the cheapest motherboards possible, typically older generation hardware with as many PCIe lanes as they could attach GPUs too. Economically until now Intel H81 and B85 motherboards have been the most economical, with affordable pricing and cheap CPUs to power them. Today this is no longer the case, as these chipsets become rarer due to demand, especially given the fact that these models have been discontinued by most manufacturers.
Now miners are moving to newer motherboards, with most users opting for Intel's 100-series motherboard offerings, where several issues have appeared that will get in the way of efficiently mining you chosen currency. This is particularly prevalent amongst those who utilise more than two GPUs on a single motherboard.

MSI has now come to the rescue with mining specific BIOS files that will help Windows to recognise and utilise additional GPUs, with BIOS files coming to 6 motherboards already. These BIOS files add a new "above 4G decoding" option that will allow end-users to efficiently utilise up to six graphics cards.

With the rise of bitcoin/ethereum mining, AMD graphics cards once again became one of the top-selling graphics card series in the market. However, it is relatively harder to acquire the economic mining motherboard due to the fact that Intel slowly discontinued the H81 and B85 chipset, and this caused the shortage of mining motherboards in the market. Users found a new way out along with the release of the 100-series chipset, yet many of them found that when they attached 6 AMD graphics cards on the 100-series motherboard, even though the board successfully recognized 6 graphics cards, there were always exclamation marks on 3 or 4 graphics cards within device manager in the OS. And, of course, the cards with exclamation marks would not function properly during mining. MSI consistently heard such inquiries from customers.

MSI has also compiled a simple list of modern motherboards that can support up to eight separate GPUs, coming from both AMD and Intel camps. These motherboards should be readily available from manufacturers. 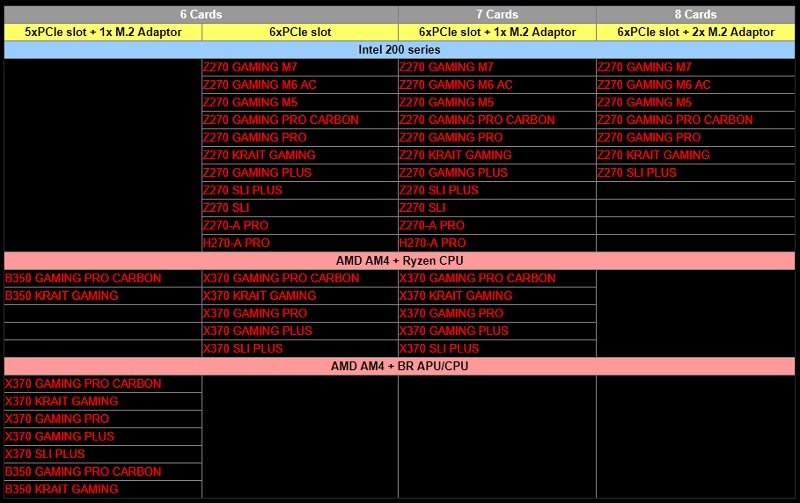 More information on MSI's latest mining oriented BIOS files is available on MSI's website, including instruction on how to install these new BIOS revisions and how to access "above 4G decoding" mode.

You can join the discussion on MSI's new mining oriented 100/200-series BIOS files on the OC3D Forums.