Get your motherboard at a lower price and up to Ã?Â£90 in Steam vouchers

Between now and August 14th, MSI is offering PC builders reduced prices for its B550 motherboard lineup for a limited time, offering price reductions of up to £25,

For sub-£220 motherboards, price reductions this large are huge, especially given the age of B550 as a platform. On top of this, this temporary promotion also stacks with MSI's longer-running (Until August 31st) "Stop Struggling, Start Evolving" campaign, which allows purchasers of MSI B550 motherboards and selected AMD Ryzen processors to get free Steam vouchers with their purchases. Add on an MSI case and MSI Liquid cooler, and you could get as much as £90 in Steam vouchers.

The only B550 motherboard from MSI that isn't applicable to MSI's Steam voucher promotion is the B550M PRO-VDH WIFI. Below is a list of the MSI B550 motherboards which now feature limited-time price reductions.

As an example, new purchasers of AMD's Ryzen 7 3700X and an MSI MPG B550 GAMING EDGE WIFI can currently save £15 on their motherboard and get £50 in Steam vouchers from MSI. In addition to this, AMD is giving away free copies of Assassin's Creed Valhalla with their Ryzen 7 3700X or above processors through their latest "Equipped to Win" Bundle, adding more value into the mix.

You can join the discussion on MSI's B550 pricing reductions and Steam voucher promotions on the OC3D Forums. 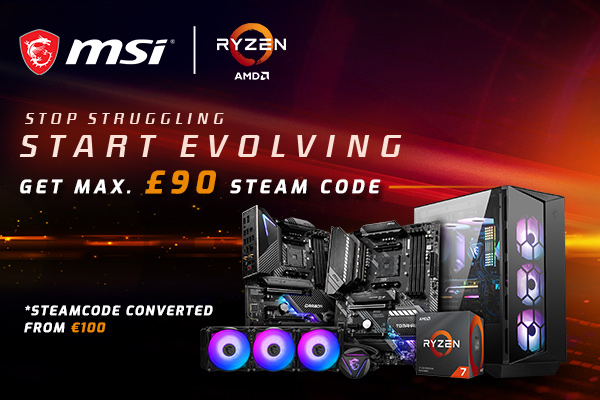 Wraith
COME ON!!!! Really! Why you do this too me MSI!?Quote

Dawelio
Quote:
Am I missreading the article? Since either they are considered the same board or the one I’m set to get soon, the MSI MAG B550M MORTAR, isn’t in the list. Only the WiFi version, which atleast according to MSI’s own website is an motherboard itself.Quote
Reply