MSI declares that their 300-series AM4 motherboards are now ready for Zen 3 with AGESA 1.2.0.7

AMD has announced great news about extending the portfolio for system builds. The Ryzen 5000 Series desktop processor will now support the oldest socket AM4 motherboards, which includes the X370, B350, and A320 chipset. This substantial improvement offers a seamless way to upgrade to “Zen 3” performance, including the AMD Ryzen 7 5800X3D that has ground-breaking AMD 3D V-Cache technology. 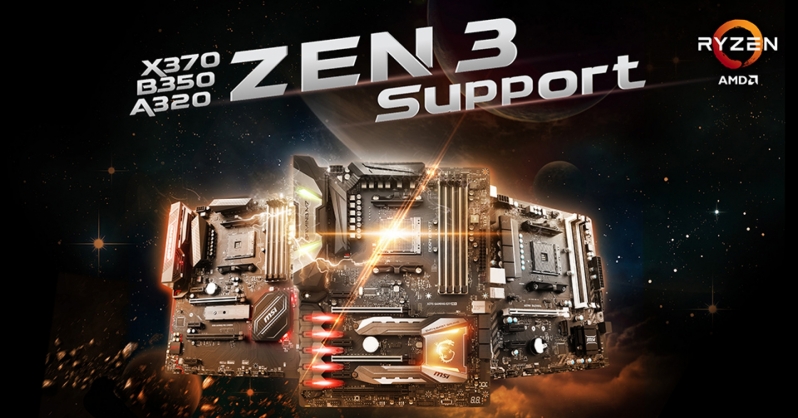 You can join the discussion on MSI's Ryzen 5000 compatibility with their oldest AM4 motherboards on the OC3D Forums.

I'm at a loss for now but 15k multi thread in cinebench and hugh bumps in games so overall can't be too unhappy tbh, but i'd like the manual OC issue solved i don't care about the light i'm never taking it out again, MX5 thermal paste is hella hard to take the block off it pulled the chip out with it, thankfully everything was fine after reseating and all the same issues and performance, so I am NEVER doing that again LUL

Update: After alot of tinkering and finally finding the menu within a menu within a menu I goto the PBO settings, set them somewhat differently to ryzen master lower numbers overall, but much the same result clocks wise and cinebench score similar to before little lower but much more stable voltages. So for now it's working as it should without the need of ryzen master all via bios, can't say i like playing with PBO that much lot of trail and error to find a kinda sweet spot, the 1700 was way easier to OC than this was

Still it's boosting correctly now 4650mhz all core in cinebench so even with lower numbers in the bios than ryzen master i'm getting the same result which seems a little odd to me, just lower vcore and more stable seems to be the only difference, idk enough to want to play more atm

g0ggles1994
Still no new BIOS for my Gaming Pro Carbon. Same for the Pro Carbon-AC and Gaming Pro. Christ.Quote

KingNosser
Quote:
I'm on a gaming pro carbon check msi reddit they have a google drive page with the bios's before they go onto the website, all the 300 series are there otherwise i guess next week they will go onto the main website.

KingNosser
Quote:
No problem man, tip if you have a CPU LED light after switching CPU ignore it as many of us have that, the PBO settings are in multiple menus, the bios layout is totally different to what we are used too.

May help but what i done was uninstall the chipset drivers, update bios, switch cpu's, install latest chipset drivers and after that it was all fine, just the OC issues i had and the cpu led light issue. Windows saw everything as new devices so when i first booted it went nuts installing everything and updating everything. My only real issue was the OC menus in the bios and having to reinstall my Rift S headset otherwise it's been fine, let me know how you get on

My PBO settings that are working nicely

If anyone has any good ideas about how to tweak it better i'm all ears, a few cores now boost to 4.9Ghz