AMD's AM4 socket is one of the longest-lived consumer CPU sockets of the past decade, receiving support for three full generations of Ryzen series processors that range from dual-core Athlon series APUs all the way to AMD's latest 12-core monster, the Ryzen 9 3900X.

With the release of AMD's Ryzen 3rd Generation processors, creators of 300/400 series motherboards are presented with a problem. The BIOS chips on their older motherboards are limited in size, and adding new CPUs into the mix comes at a storage cost. What do you do when you run out of BIOS space?

Those who plan on using Ryzen 3000 series CPUs on MSI's 300/400 series motherboards will need to update their BIOS' to enable support for Zen 2 series processors, utilising what MSI calls a "BETA BIOS".

These new beta BIOS files drop support for AMD's Bristol Ridge series processors, the last of the company's Bulldozer-based Excavator processors, making their AM4 motherboards into Zen-only platforms. As shown below, these BIOS files will also offer users a simplified user interface, which enables these boards to offer the same features as before while retaining features such as A-XMP, M-Flash and Smart Fan Control.

Users of these BETA BIOS files will also be unable to utilise RAID mode, which will undoubtedly annoy some users. That's the cost of Ryzen 3rd Generation support.

Below is a list of processors that are supported by MSI's new BETA BIOS files, and those which are no longer supported. Motherboards which use AMD's new X570 chipset are designed to use larger BIOS chips, which will avoid this issue in the future, though these platforms also lack support for Zen 1 "Summit Ridge" and "Raven Ridge" processors by default. 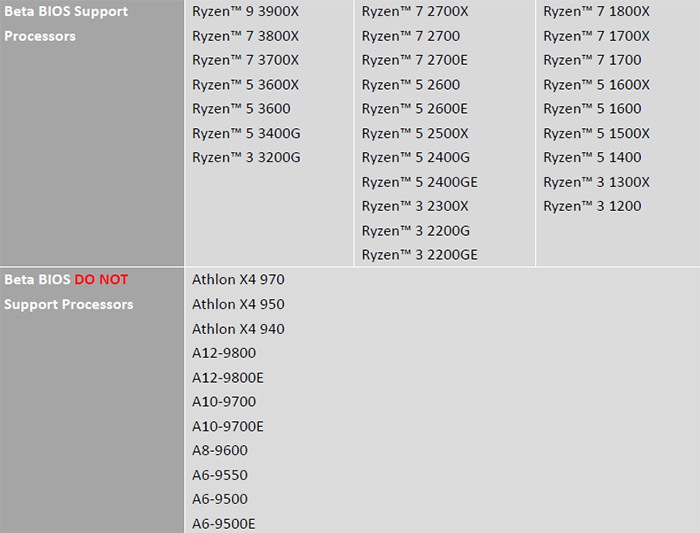 Instructions on how to update the BIOS of your MSI motherboard are available here. Those that are interested in the performance of AMD's Ryzen 3rd Generation 3700X and 3900X performance should read our full review here.

You can join the discussion on MSI's cut-back 400/300 series AM4 BIOS files for Ryzen 3rd Gen on the OC3D Forums.

Greenback
My MB isn't there but a reply to a comment suggests next week, not sure I'd want to go Beta so may just wait for the official release, or see if prices drop once the hype is overQuote
Reply