MSI and AMD may be preparing "Combat Crate" gaming bundles

Will these bundles be able to offer gamers more value for money?

MSI and AMD may be preparing "Combat Crate" gaming bundles

AMD and MSI are reportedly working on Ryzen/Radeon system bundles, combining MSI's B350 TOMAHAWK motherboard with an RX 580 Armor 8GB OC and either a Ryzen 5 1600 or Ryzen 7 1700 CPU.

These bundles will hopefully allow more of AMD's Radeon graphics cards to sell to gamers, rather than cryptocurrency miners and enable both AMD and MSI to sell their remaining Ryzen 1st Generation CPUs and B350 motherboard respectively. These bundle will allow both companies to clear their stock while allowing AMD to deliver a lot of value to PC gamers.

Videocardz has released the following quote which explains the purpose of AMD's Gaming "Combat Crate", providing users with the hardware that they need for a great gaming experience.

The AMD Combat Crate comes stocked with essential hardware you need to push your game to the next level and lay waste to the competition. With a lightning-fast Ryzen processor, powerful RX graphics backed by revolutionary Radeon Software Adrenalin Edition and a feature-ready MSI motherboard — the AMD Combat Crate is the ultimate arsenal for gamers. 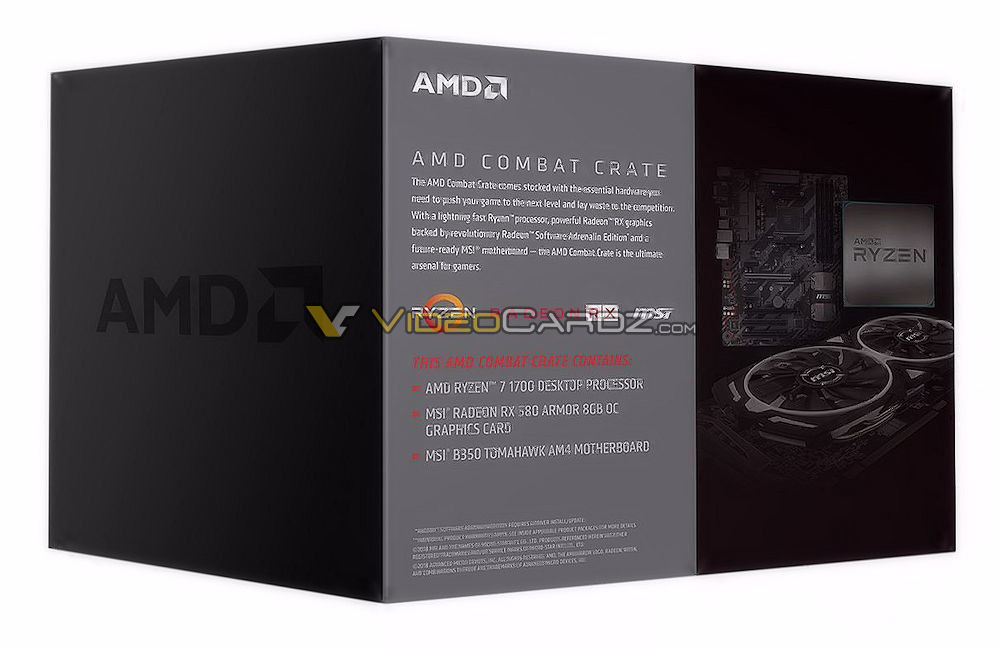 AMD's Ryzen 5 1600 and RX 580 are both capable gaming components, especially if the end user overclocks their Ryzen 5 1600, with many users reporting overclocks of around 3.8GHz on the unit's stock cooler.

At this time AMD and MSI have not officially revealed these "Combat Crate" bundles, though they make a lot of sense given the recent release of their Ryzen 2000 series. AMD wants to get rid of their old stock and get more GPU market share, and PC builders want a bargain. It's a win-win situation.

You can join the discussion on AMD/MSI's rumoured "Combat Crate" gaming bundles on the OC3D Forums.

Dark NighT
Combat Crate, i'm sure Msi thought that one up, their marketing and naming is awful!Quote

WYP
Quick update. The first Combat Crate bundle is online on Amazon US.

TheF34RChannel
Quote:
=fail in my book.Quote

spolsh
It's a little too late, my guess, it was a get cards to gamers not miners strategy - miners wouldn't want to buy mobo/chip every time with a card.Quote
Reply