An unofficial benchmark that is designed to provide higher and longer CPU loads.

Most CPU benchmarks are designed to finish quickly, making it easy for users to quickly gather performance data for their systems and share their results to impress their peers with their system's performance levels.

A large problem that faces PC benchmarking is the question of reliability, especially now that CPUs with incredible core counts are making their way ever closer to the mainstream market. We only have to look as far back as Broadwell-E to see 10 cores and 20 threads as the pinnacle of what the high-end desktop market had to offer, but now 8-core processors are relatively common on mainstream CPU sockets, and a staggering 64 threads are available for less than $2,000 thanks to AMD's Ryzen Threadripper 2990WX.

With core counts exploding in both the mainstream and enterprise CPU markets, traditional CPU benchmarks have become too fast to run. The likes of Cinebench R15 takes a handful of seconds to run on today's high-end offerings, giving little time for the processor question to heat up, and show an accurate representation of the processor's boost clocks in longer-term workloads. 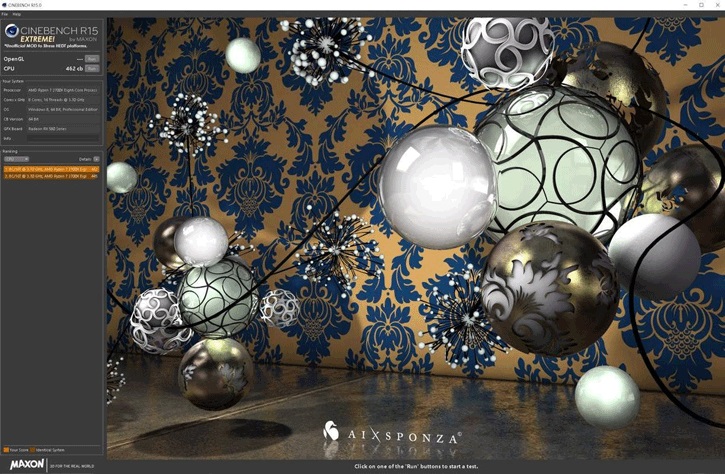 In our CPU and motherboard reviews, we utilise a custom Blender rendering test to achieve similar long-term results as Cinebench R15 Extreme, though we bring things to the next level by using a workload that can take upwards of 30 minutes for processors like Intel's 8-core i9-9900K to complete and over 10 minutes for AMD's 32-core Ryzen Threadripper 2990WX to complete. This allows us to test processors under heavy sustained loads, giving us deep look at the processor's thermals and clock speed variations. Cinebench R15 Extreme doesn't take this long to test, but it is significantly longer than Maxon's official version of Cinebench R15.

You can join the discussion on Cinebench R15 Extreme on the OC3D Forums.

Emu
I scored 418 with my watercooled but no set O/C 2700x with XFR enabled. Not sure what my average clock during the test is but it is somewhere between 4.125GHz and 4.3GHz on all cores. :\Quote

WYP
Quote:
Be careful with the repeated posting fella. Could have easily flagged you as a spammer. With such a low post count any post you have with a link or image needs moderator approval. Had to delete three duplicate posts there.Quote
Reply