Cinebench R15 is perhaps one of the most well-known benchmarks from the CPU reviewers handbook, acting as a quick and easy way to judge the performance of your new processor, scaling incredibly well with higher CPU core counts.

Maxon, the creator of Cinebench, has finally decided to release an updated version of this benchmark, tacking the biggest problem that the tool faced in the modern era. Simply put, Cinebench R15 was quickly becoming irrelevant, with every new release of Cinema 4D coming with new CPU optimisations and other changes that made Cinebench, the official benchmark of Cinema 4D, less representative of the tool with every new release.

It says a lot about how behind the times Cinebanch R15 was, given the fact that its replacement is now based on Cinema 4D version 20. This means that Cinebench R20 includes optimisations for the latest CPU hardware and their performance enhancing features, offering improved accuracy and much higher memory requirements. The benchmark is also said to take around 8x the computational power as before, thanks to the use of a more complex test scene.

Another change with Cinebench R20 is that the GPU section of the benchmark has been cut, making the R20 a CPU only test. By taking advantage of the modern features of both AMD and Intel processors, Maxon has estimated that new AMD and Intel processors would be able to render the same scenes as Cinebench R15 "twice as fast" on the same hardware, which says a lot about the level of optimisation that has happened since Cinema 4D version 15.

Cinebench is a real-world cross-platform test suite that evaluates your computer's hardware capabilities. Improvements to Cinebench Release 20 reflect the overall advancements to CPU and rendering technology in recent years, providing a more accurate measurement of Cinema 4D's ability to take advantage of multiple CPU cores and modern processor features available to the average user. Best of all: It's free. 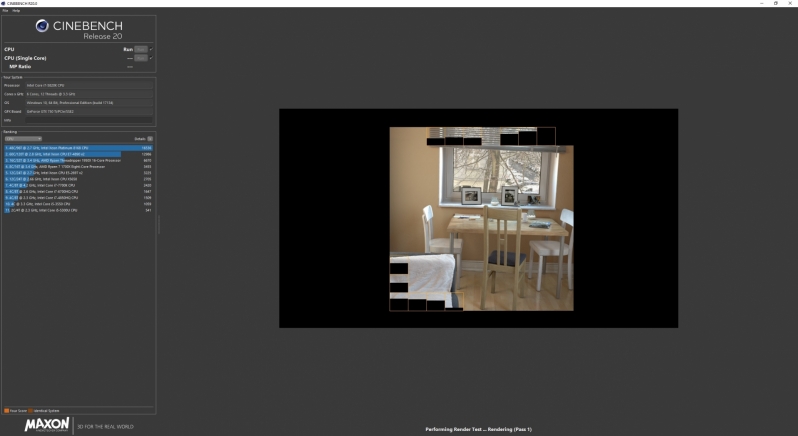 In the near future, we plan to retire Cunebench R15 from our benchmark suite, replacing it with Cinebench R20, which will provide more accurate performance data for users of Cinema 4D's latest release.

Right now, Cinebench R20 is available to download on the Windows Store and via the Apple Mac Store. No standalone download option is available on Maxon's website.

You can join the discussion on Maxon's Cinebench R15 on the OC3D Forums.

WYP
I will make a dedicated Cinebench R20 thread soon. Be patient.

Thou I have to admit I don't like windows store only game I've ever got from there was hydro thunder hurricane I generally wait for a steam release if I know it's coming.Quote