A six-core Ryzen 3rd Generation Zen 2 processor has appeared on the Geekbench database, with the prolific leaker TUM_APISAK being the first to spot the new processor.

The interesting thing here is that this processor offers single-threaded performance levels that can surpass AMD's Ryzen 7 2700X, the company's current generation flagship, despite the new processors 3.2GHz Base and 3.99GHz boost clock speeds, delivering over 5000 single threaded points. In our initial review for AMD's Ryzen 7 2700X, the processor achieved a single-threaded score of 4923, which is over 100 points behind the new Zen 2 processor.

What's more astounding is this new processors multi-core performance, which surpasses the multi-threaded score of AMD's Ryzen 7 2700X, despite the fact that this Zen 2 engineering sample ships with two fewer cores. This hints at some notable performance changes within AMD's Zen 2 architecture, which is great news for AMD. The fact that this testing was conducted on what appears to be 2666MHz memory makes this feat even more impressive. 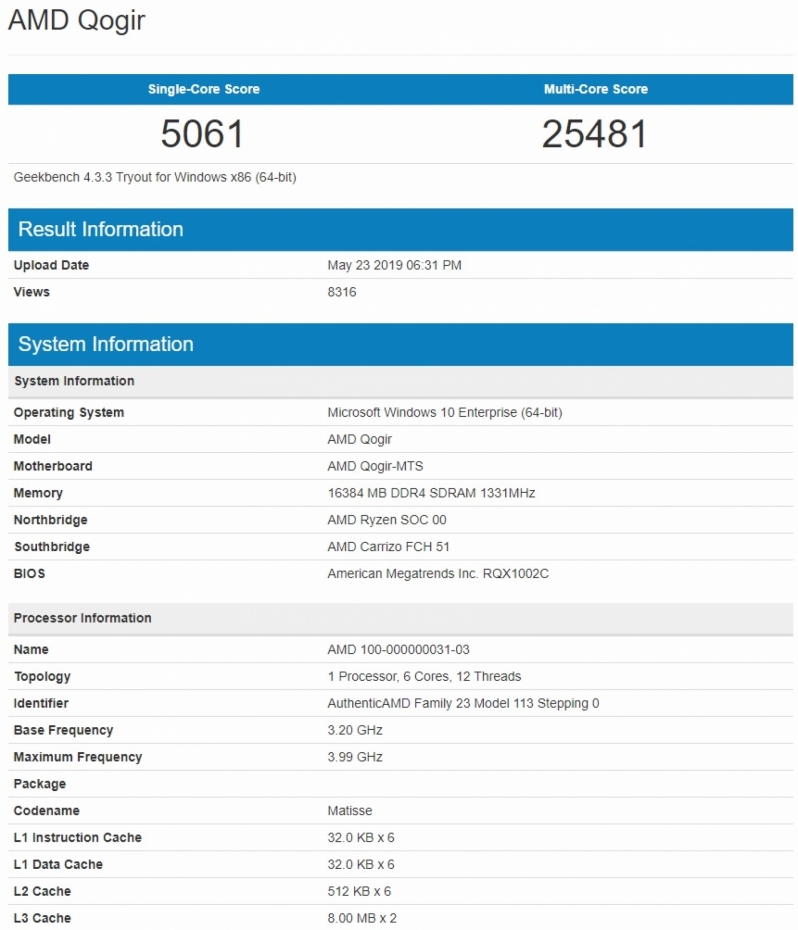 If these benchmarks are legitimate, they are a clear sign that AMD has been working to address the performance shortcomings of their original Zen architecture, a move which will make the company a lot more competitive with Intel with the launch of their Ryzen 3rd Generation and EPYC 2nd Generation processors.

AMD's Computex 2019 keynote is set to take place on May 27th at 3 am UK time, so we should expect to hear more about AMD's Ryzen 3rd Generation processors soon.

You can join the discussion on AMD's 6-core Ryzen 3rd Generation CPU leak on the OC3D Forums.


Though I'm running OC at 4.8GHz all core and 3200MHZ CL14 memory - Ryzen tests were run with 2666Mhz memory, no idea what latency.Quote
Reply