A leaked slide from Intel has revealed the peak performance of the company's top-tier i9-10980HK processor, confirming that the chip will break past the 5GHz barrier.

With this new mobile processor, Intel plans to reach peak clock speeds of 5.3GHz, thanks to the company's existing Turbo boost technology and a new technique called "Thermal Velocity Boost".

According to Videocardz, Thermal Velocity Boost is an opportunistic clock speed which can be reached if and when power and thermal budgets allow it, making the technique similar to AMD's XFR (eXtended Frequency Range) technology. This means that Intel's 5.3GHz clock speeds will not be reached for sustained periods, though it should provide a notable performance boost for Intel.

It has been reported that Intel plans to announce its 10th Generation Core-H series processors on April 2nd, the same day that Nvidia reportedly plans to reveal its RTX Super series of mobile graphics cards. 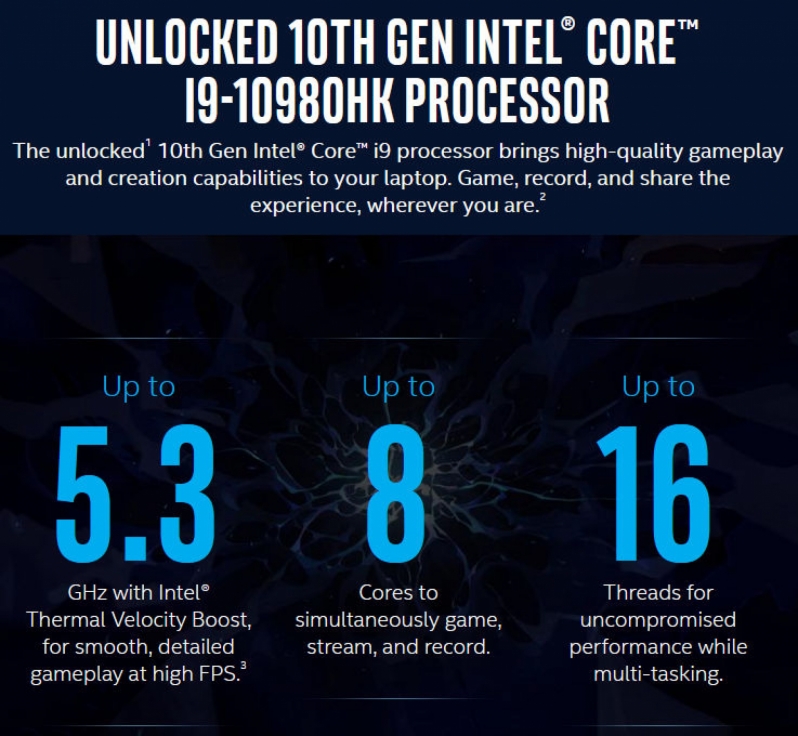 You can join the discussion on Intel's i9-10980HK processor with up to 5.3GHz clock speeds on the OC3D Forums.

I would be amazed if anything but LN2 could cool this at 5.3 over all cores. We'll see I suppose.Quote

g0ggles1994
It will peak at 5.3GHz for a millisecond then throttle straight back down. At least it gives morons the bragging right "My Intel can do 5GHz, what can your AMD do?"Quote

66racer
This could be very interesting. The i9 9980HK on liquid metal was already amazing for a mobile CPU inside the Clevo PB51.Quote
Reply