Will 5GHz overclocks be common on Coffee Lake?

Overclocking is commonplace amongst enthusiast PC builders, allowing PC users to squeeze just that little bit extra from their components to give them an edge above the component's stock performance.

Whether it is to save some time when video rendering, or to play games at a higher framerate, overclocking allows PC users to get more from their hardware, though sadly the process to achieve an optimal overclock can be long and difficult.

The time investment required to overclock a system has led component makers to create "one-click" overclocking solutions, allowing users to use what manufacturers could refer to as "one size fits all" overclocking settings, which will allow the majority of chips to reach certain speeds.

Today, a leak from the Intel subreddit has shown that ASUS has a 5GHz overclocking profile that is built into several of their motherboards, which could mean that 5GHz overclocks will be fairly common for Intel's unlocked Coffee Lake series CPUs.

Automatic overclocks are not new, though in the past they would use excessively high voltages and supply mediocre overclocks, though today things are a little bit better, providing a high overclock for most systems but with settings that are still sub-optimal. The setting used by ASUS here will likely come as the result of vigorous internal testing, though the "one size fits all" approach will make this automatic overclock inferior to a properly tested CPU specific overclock. 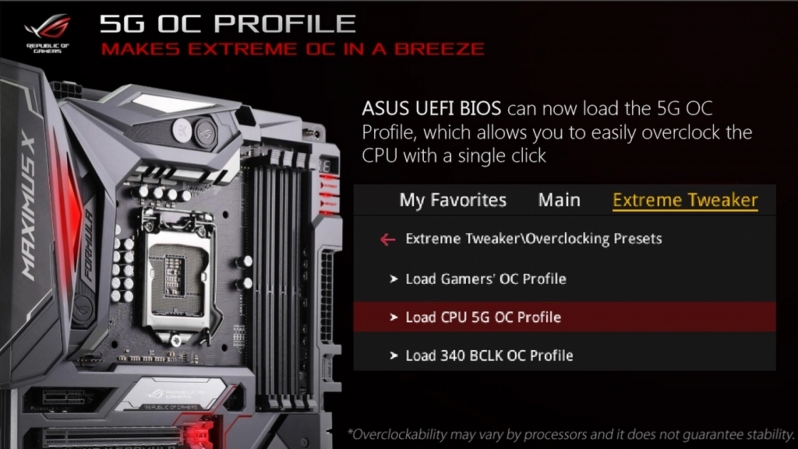 End users will always get the best results from manual overclocking, as it will allow users to run their CPUs at the lowest stable voltages and the highest stable clock speeds that their CPUs are capable of. This will allow their CPUs to produce less heat and consume less power an automatic overclock, which will likely run at higher core voltages.

While we do not recommend using automatic overclock tools, they do provide an indication that a large proportion of Coffee Lake CPUs will be able to reach 5GHz, which is great news for Intel.

You can join the discussion on ASUS' 5GHz overclocking profile for their Z370 Maximus X Formula motherboard on the OC3D Forums.

AlienALX
The 5ghz carrot. That old chestnut. Who GAF?Quote

BigDaddyKong
And probably as always way too much Vcore in the process.Quote

Gothmoth
would make more sense to get rid of the toothpaste TIM.

but ok the use of TIM is not ASUS fault.Quote

Cigarjohn
I hope Asus comes out with an z370 workstation model like they've done with the z170 an z270.Quote
Reply