AMD's preparing " A Showcase of The New AM5 Motherboards" as the company's next "Meet The Experts" events, where the company plans to showcase motherboard designs from BIOSTAR, MSI, ASUS, ASRock, and Gigabyte and discuss how AM5 "introduces more performance, power, and possibilities than ever before."

When summarising this event, AMD says that their August 4th showcase will be "Supporting the recent launch of AMD Ryzen 7000 Series processors", suggesting that the company plans to release more information about their Ryzen 7000 series on, or before, August 4th.

So far, AMD has not revealed much information about their upcoming Ryzen 7000 series of processors, aside from some small snippets about their Zen 4 architecture, its clock speeds, and its core counts. As of yet, we have not seem much detailed performance information about AMD's Ryzen 7000 series CPUs, which means that there is plenty that AMD can reveal before August 4th.

On their August 4th event, AMD is expected to showcase X670E, X670, and B650 motherboard designs in detail, highlighting how their support for DDR5 memory and PCIe storage will impact the performance of AMD's new AM5 processors, and how these motherboard designs will "unlock the full power of AMD Ryzen 7000 Series processors."

Let's be clear here, by "launch", AMD does not mean products on shelves. By launch, we can expect AMD to reveal more detailed information about Ryzen 7000, more concrete specifications and perhaps some finalised specifications. Expect a launch event that will lay the groundwork for AMD's actual launch. To put things another way, expect a hype building event, don't expect product on store shelves. 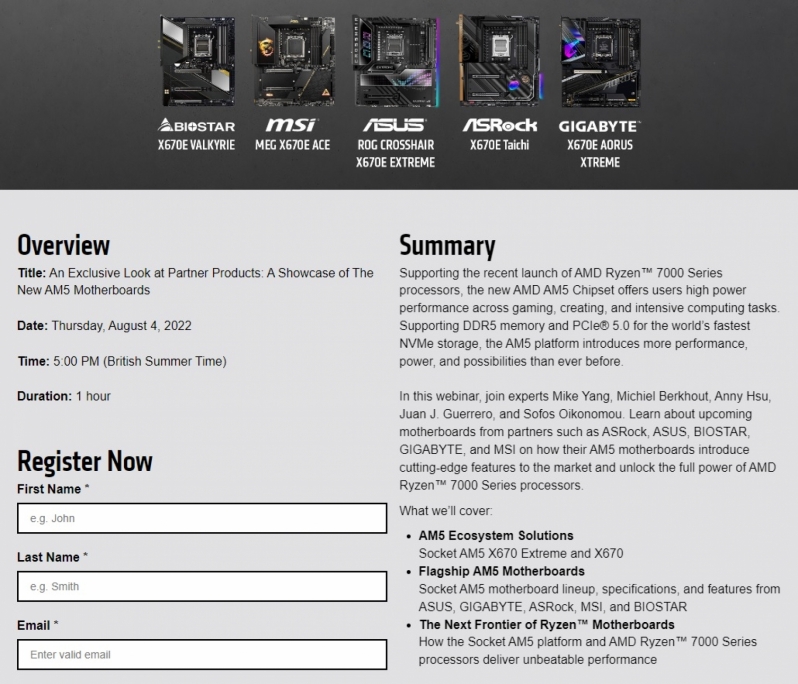 In the description of this event, AMD has stated that their "Socket AM5 platform and AMD Ryzen 7000 Series processors deliver unbeatable performance", highlighting AMD's confidence ahead of their Zen 4/Ryzen 7000 series product launch.

Again, we will say that we don not expect products to hit store shelves anytime soon. We expect a hype-building event that will reveal more concrete information about Zen 4 and Ryzen 7000. At this time we expect AMD to reveal launch product names and some official specifications, not purchasable products.

You can join the discussion on AMD's upcoming Ryzen 7000 launch on the OC3D Forums.

Dicehunter
Very cool, Although I'm skipping, Not gonna make the same mistake as I did when DDR4 was new, Basically a beta tester for the first gen.Quote

hmmblah
I think my work machine is going to be a beta tester....time to replace this TR 1920X.Quote

Dicehunter
Quote:
I'm not getting a DDR5 platform until 8000MHz and really low timings is very affordable, So probably around 2024.Quote
Reply