In recent years, every series of Intel motherboards has supported two generations of CPUs, be it LGA 2011 (X79), LGA 1155, or LGA 1150. It is now expected that with Intel's upcoming Skylake generation of Xeon and Skylake-E series CPUs that Intel will be moving to a new, larger socket designs and will be upgrading several key parts of their server platform.

Below we can see a picture of what is thought to be Intel's upcoming Skylake-E socket LGA 3647, which will feature 6-channel/Hex-channel DDR4 memory and will feature a larger number of PCI lanes than the previous generation of Intel Xeon CPUs.

Right now it is believed that Intel's Skylake-E Xeon CPUs will feature 48 PCI 3.0 lanes, giving CPUs on this platform the ability to run with more PCI devices like GPUs, ultra-fast storage, and other PCI devices with the hex-channel memory providing the CPU with much more memory bandwidth and support for much higher amounts of onboard memory. 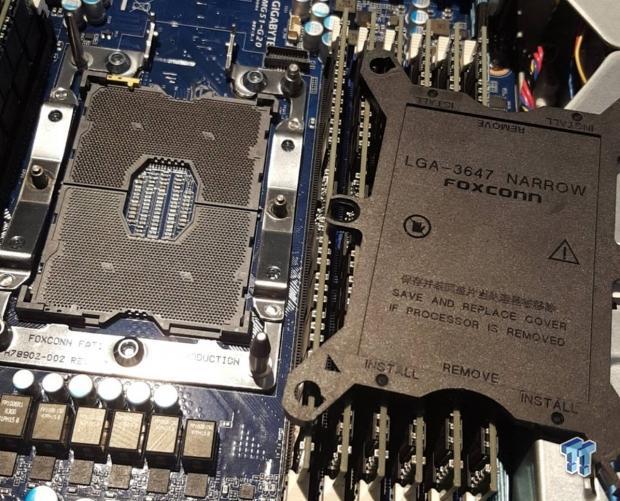 This new CPU socket is huge, with a total of 1636 more pins than Intel's current 2011-3 platform, making Intel's Skylake-E CPUs considerably larger than their current Generation Broadwell-E based chips.

You can join the discussion on Intel's rumored LGA 3647 CPU socket on the OC3D Forums.

AdmiralDonut
So the CPU will go back to having actual pins, like the AMD chips? Rather hard to tell with that image, but those look like pin holes.Quote

CreatiXx
that looks awesome! And sparkle you might be rightQuote

Tolemac
Quote:
It does look like it judging from the picture they do look like holes and not pinsQuote