This is a silicon interposer on steroids!

Intel is well known for their chip-making capabilities, with the company acting as one of the world three leading-edge manufacturers in the world of silicon lithography alongside TSMC and Samsung.

In recent years Moore's Law has slowed, with process node advancements talking more time and money than ever to create. This has lead the industry to develop smarter designs, invest in multi-chip technology and overcome the boundaries that monolithic chip production lays upon designs.

Intel's latest answer to the slow progress of Moore's law is Foveros, the industry's first 3D packaging technology, which allows chips to not only to be laid side-by-side but on top of each other to offer increased chip density and low latency throughput. 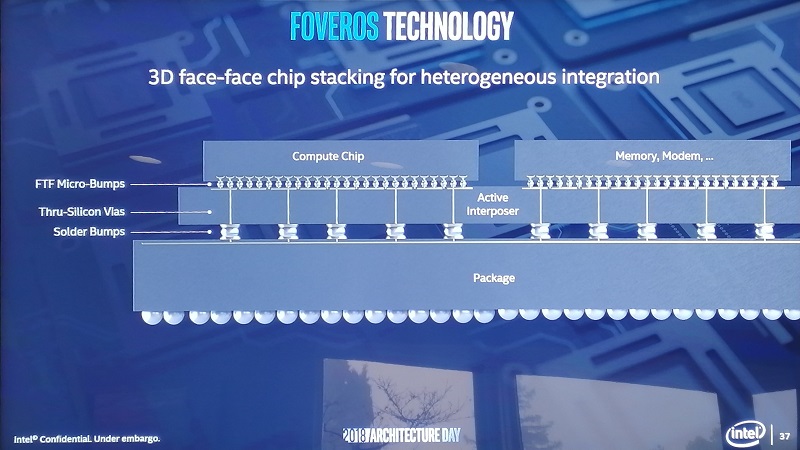 In effect, Intel's Foveros technology is similar to the silicon interposers that were used to create AMD's R9 Fury and RX Vega series graphics cards. Intel's twist is that instead of using "dumb silicon" Intel has decided to integrate I/O, SRAM and power delivery circuits into the bottom/base die, with performance logic (CPU cores) chiplets being set on top of it.

This is part of Intel's plans to create next-generation processors using small chiplets instead of a single monolithic die, with Intel's first foveros chips using a 22nm base die with high performance 10nm compute chiplets on top. This design scheme is similar to AMD's chiplet approach to Zen 2 EPYC processors, albeit with a stacked 3D twist.

Intel showcased demo silicon at their architecture summit, showing that their technology is in a working state, though at this time it is unknown how long it will be before we see these 3D chip designs in shipping products. 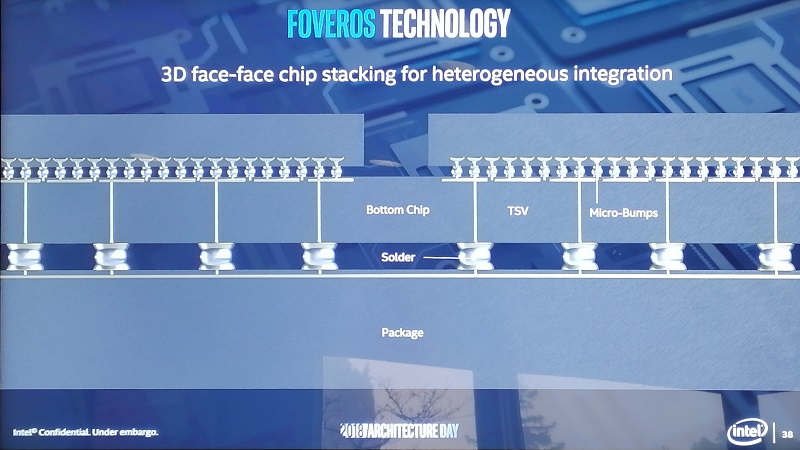 Intel's forveros 3D die stacking technology may be in its infancy, but it will undoubtedly play a big part in Intel's future, especially within the mobile market, where space comes at a premium.

You can join the discussion on Intel's Ferveros 3D packaging technology on the OC3D Forums.

NeverBackDown
This is the innovation we expect from Intel. About damn timeQuote

Peace Đ
Quote:
Well, what mostly caught my eye was the "similar to AMD" part. So let's hope they are improving upon AMD's efforts