One of the most common questions that we have been asked recently is what will Intel's Z270 motherboards bring to the table. Will they be a significant upgrade over Z170, or simply a side-grade with a refined design but no additional features?
Now leaked documents from Benchlife.info have revealed that Intel's Kaby Lake ready Z270 and H270 chipsets will feature four additional PCIe lanes for M.2 storage as well as support for Intel's Optane technology, making them much more useful for ultra-enthusiasts than their previous generation counterparts when ti comes to taking advantage of next generation storage mediums.

These additional PCIe lanes will allow users to use PCIe based NVMe storage in RAID with ease, allowing some insane levels of storage performance, with support for Optane storage opening up the possibility to having a desktop with non-volatile storage that offers RAMDisk-like speeds. 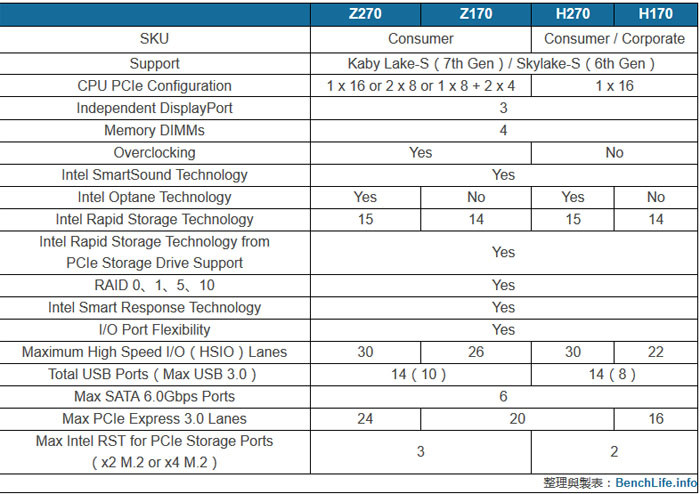 With these new upgrades, Z270 motherboards now have enough PCIe bandwidth to offer a lot of additional high-bandwidth features like USB 3.1 controllers, thunderbolt ports or additional M.2 or U.2 slots for PCIe storage.

These changes from Intel will allow their 200-series motherboards to be feature rich when compared to their 100-series counterparts, which is a great thing for consumers.

You can join the discussion on Intel's 200-series chipset motherboards on the OC3D Forums.

It looks like Intel's upcoming Z270 and H270 chipsets will add more PCIe lanes to the platform for NVMe storage.https://t.co/L3Z7gbgCGX pic.twitter.com/uUJ0QKQCbO