For years Intel's processors have seen limited performance leaps generation-to-generation, mostly thanks to the company's inability to move away from their ageing Skylake architecture and 14nm manufacturing process.

With Tiger Lake, Intel promises a lot, bringing AI performance further into the company's mainstream product stack while also deliver a "double-digit CPU performance increase". Better still, this increase isn't coming through the use of additional cores, its coming thanks to single-threaded performance gains.

While Geekbench 4 is a benchmarking utility which heavily favours Intel's processors, their test cases nonetheless highlight areas where AMD's Ryzen architecture can improve. Even so, Intel's almost 30% lead highlights that AMD's Ryzen architecture has a lot of ground to cover before it can surpass Intel in all areas. Both Intel and AMD can offer great performance to mobile PC users, and Tiger Lake shows is that Intel still has what it takes to compete within today's competitive x86 CPU market. The question now is when will these Tiger Lake benefits come to desktop and server processors.

With Tiger Lake, we can expect Intel to heavily focus on the single-threaded performance of their latest processors, as this is an area where Tiger Lake is expected to be superior to AMD's Renoir-based Ryzen Mobile processors. While Ryzen will offer user higher core counts, Intel will offer users greater single-threaded performance, competitive integrated graphics and AI compute. 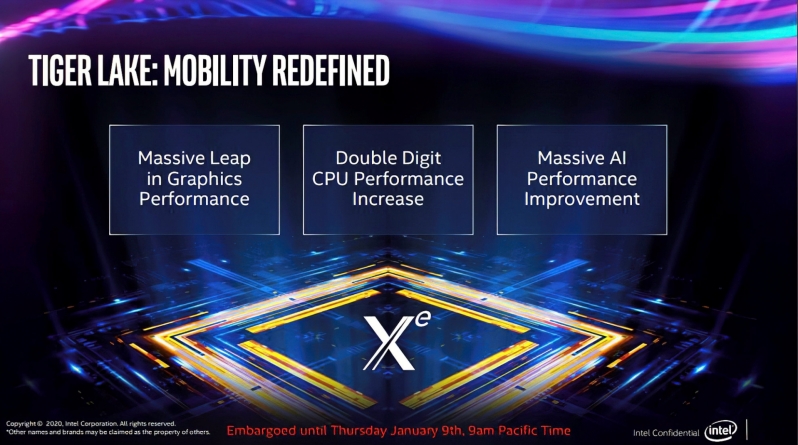 You can join the discussion on Intel's Tiger Lake mobile CPU suppressing Ryzen Mobile's single-threaded performance on the OC3D Forums.

Kleptobot
I'm not intimately familiar with geekbench and interpreting its scores. But after reading their doc on how the scores are generated and what they are comprised of it appears to be a fair test and representative of real workloads.

That being said, this is an impressive cpu i hope it is indicative of the whole lineup.Quote

Avet
I would like to see this kind of battle from Intel and AMD.Quote

demonking
Were intel, Not a month ago, telling us all how we should not be looking at synthetic benchmarks? these are not representative of real use cases.
I suppose that now they MIGHT have a legitimate edge they're happy to go back to synthetics. Its like watching a Donald Trump speech as he goes back on everything he said a few months ago and genuinely believe is his own bullQuote

Dawelio
Personally I’ve never really understood the usage of using said benchmark for marketing purposes. Since it’s just numbers and digits at the end of the day. And benchmarks isn’t what the average user is using nor doing on a daily basis.

What is more interesting though is how the fights are between the teams in terms of gaming, since that is what people are actually doing in a real world scenario.

And yes, I’m aware that there’s several different aspects that makes these sort of tests difficult to do.
Yet these would be more useful in the real world than just numbers on a spec sheet.

Since what does this tell me? That Intel has 20K points and AMD does 19K? What does that give nor benefit me in the real world and/or daily usage? Nothing. It’s pointless.Quote

Kleptobot
Quote:
Seeing as they publish what each test is comprised of and how the score is tallied I wouldn't call it pointless. Most of the tests actually pertain to realistic loads. They have just abstracted away specific tests in order to enable a more general comparison between apples and oranges per se.Quote
Reply