Hmm, so I guess deliding is still a thing...

The tech world is full of beautiful minds, from the engineers who develop the "next generation" of hardware to the gamers and overclockers who push the limits of what products are capable of.

Within that group, we also have more than a few crazies, people who are mad in the best kind of way. People who will test things that others consider too difficult, or simply not worthwhile. der8auer is one of those people, and his deliding antics have started again with the soldered Intel i9-9900K.

I'll recommend watching the video below to have a look at der8auer's findings, which may come as a shock to solder enthusiasts. Delidding Intel's i9-9900K can enable much lower thermals than Intel's stock solder, which means that delidding is far from dead with Intel's 9th Generation of processors.

After replacing Intel's Soldered Thermal Interface Material (STIM) with Conductonaut, a liquid metal TIM, der8auer was able to lower the thermals of his i9-9900K by eight degrees, which is a considerable change. He also uncovered another change to Intel's latest processors, which further limits their cooling potential.

When compared to their 8th Generation counterparts, Intel's 9th Generation processors use thicker pieces of silicon, which fans of thermodynamics will know will make it take longer for heat to pass through the chip. Think of it this way; you will be warmer if you use a thicker blanket. In the same way, a thicker piece of silicon will effectively add an extra layer that heat needs to pass through before getting to your CPU cooler. At this time it is unknown why Intel's 9th Generation processors use thicker silicon, though the change could be to make the structure more rigid, given the larger die size of the product.

der8auer decided to lower the thickness of Intel's i9-9900K silicon by "lapping" the processor using ultra-fine sandpaper, retesting the processor after removing 0.15mm and 0.20mm of material from his i9-9900K. After lapping his i9-9900K der8auer was able to achieve temperatures that were five degrees lower than his already delided processors, offering a combined 13 degrees drop over a stock/soldered i9-9900K. 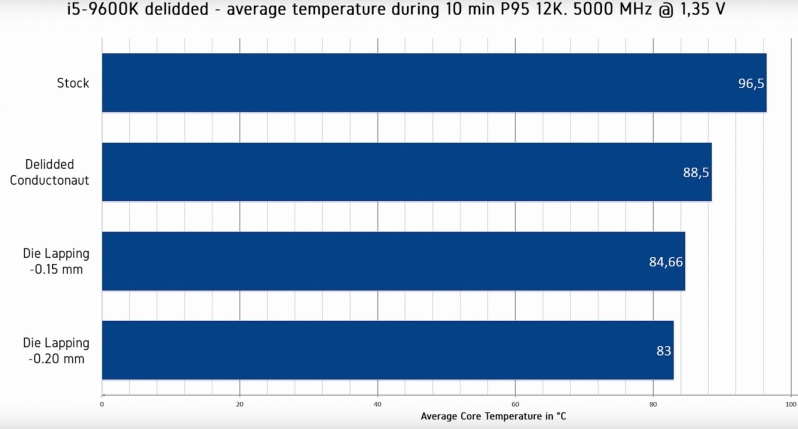 So is deliding dead with the i9-9900K? Nope, but the process has gotten more dangerous with solder added into the mix. As always, we don't recommend deliding your processor unless you are willing to risk your hardware and know exactly what you are doing.

You can join the discussion on Intel's i9-9900K achieving increased thermal performance after delidding on the OC3D Forums.

Dicehunter
Intel should really sit down with people like Der8auer and take notes because as of right now they seem to keep messing up.Quote

Avet
Quote:
Problem is they don't care. ASUS does work with der8auer, EVGA works with Kingpin, and Buildzoid, because they compete for the best overclocking motherboard. Intel at the extreme level doesn't compete with anyone. Like Nvidia they can do whatever they want, they can charge whatever they want, and they will sell everything they make because they don't have competition.

They have sold CPUs with toothpaste for years. People bought them, and voided their warranty the second they delidded them. Because they can.

Because when no common reason, or money are considered, and you want the best you have only one choice, and the competition is nowhere to be seen.

Edit: They didn't solder CPUs because people asked for solder... Lol no. They soldered them because of necessity. You wouldn't be able to achieve 5GHz with toothpaste on 9900K. 8700K you can run on 5.1 without delid. It will be on the edge of thermal throttle but achievable. 9900K without solder has no chance.Quote

Dicehunter
Quote:
Well as of last week I'm on an all AMD rig, No more Intel or Nvidia for me for the foreseeable future.Quote

NeverBackDown
Quote:
They know how to do it they've done it before. They only care about money and marketingQuote

AlienALX
Quote:
Intel have never given a single toss about their user base. They know what is best, every time. You may as well pee in the wind than offer them any advice. Look how long they put toothpaste on their CPUs and the uproar it caused.

They only soldered this one because they knew without it? the 2700x would probably be a lot closer than it is now.

The funny part is that clock for clock I reckon the AMD might actually be quicker, but 4.3ghz.

Hoping they can edge toward 4.6 or so with the next gen. That will reaaaaaaally even the tables.Quote
Reply