Intel's share price has taken a hit of around 6% following the release of their Q4 2019 financial report, despite reporting growth across almost all sectors of the company.

Intel blames this shortfall on lower NAND prices, weaker than expected modem demand from the smartphone market and a slow down in growth in the Chinese market. In Q1 2019, Intel expects their revenues to remain flat year-over-year, projecting $16 billion in revenue. In 2019 Intel expects to earn a total of $71.5 billion.

Moving into Q1 2019, Intel expects a drop in operating margin of 1%, thanks to the costs of ramping their 10nm technology and several other factors.

In 2019 every major business group within Intel earned more money, with the company's data center group growing by 21% when compared to 2017. The company's Non-Volatile Solutions Group also generated 22% more revenue than the previous year, thanks to high demand for NAND and the growing use of Optane memory. Lower NAND pricing made the growth of this business group lower than expected. 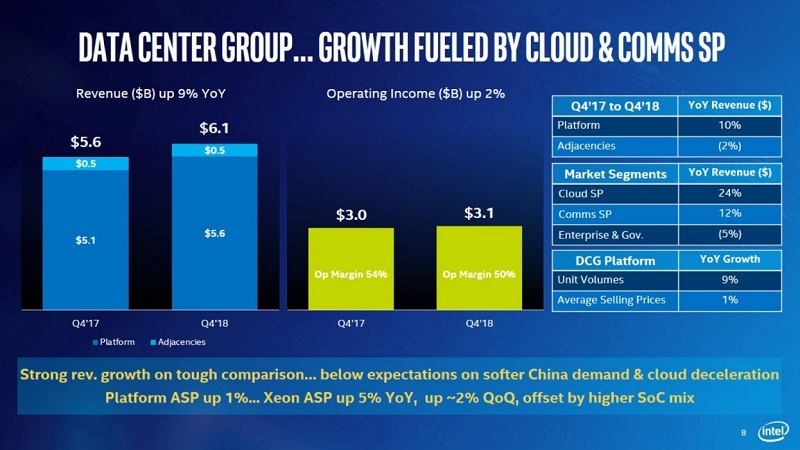 Intel Client Grout also saw growth of around 9% in 2018, thanks to growing demand for high-end components. The release of Intel's Coffee Lake products has propelled this growth by delivering performance levels that were previously never seen in Intel's client hardware. 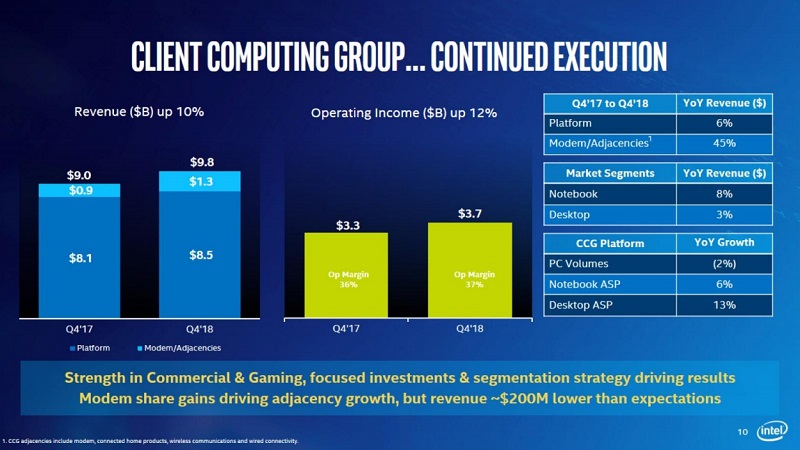 While Intel's 2018 growth can be seen as nothing but outstanding, the company's lower than expected Q4 and weak 2019 projections have caused many shareholders to lose faith in the company's growth, prompting the company's shares to lower in price. Regardless, Intel is expected to increase their 2019 revenues by $700 million over 2018, which is no small feat. The problem is that analyst expected more, and the company's continued lack of a CEO has added an extra layer of uncertainty to proceedings.

You can join the discussion on Intel's Weaker than Expected Q4 on the OC3D Forums.

Dicehunter
Good, I hope they keep going down, they need to taste humble pie.Quote

smilertoo
They must have seen this coming as soon as Ryzen appeared, it showed that Intel had been sitting on their hands for years milking the customers.Quote

TheF34RChannel
So both green and blue are getting a sour taste in their mouths; excellent! About time tooQuote

NeverBackDown
Quote:
It's because of China having unexpected growth in the economy. Which is a big deal because they have the fastest growing and most profitable market in the world and they hold an immense sway over endless market segments.Quote

tgrech
Yep, this also carries over to foundries like TSMC & Samsung, and will likely hit the whole industry in a few ways, it's not going to meaningfully affect most companies plans or rollouts or positioning but it'll likely mean a bit more care is put into riskier rollouts & R&D spending on longer term products & such for the time being, maybe some products will launch later in the year rather than earlier.Quote
Reply