Intel's product launch schedule has been leaked, looking as far ahead as mid-2018

Intel's product launch schedule has been leaked, looking as far ahead as mid-2018

Some documentation regarding Intel's upcoming launch schedule has been leaked by Gamers Nexus, revealing that Intel plans to release additional 300-series chipsets and 8th generation CPUs as well as introduce new Optane products into their storage/SSD product stack next year.

The slides below say that additional Coffee Lake-S 6, 4 and 2-core CPUs will release in Q1 2018 alongside new H370, H310 and B360 chipset motherboards. These are all set to be consumer-oriented products with TDPs of between 35W and 65W.
In Q2 Intel also plans to release 8th Generation vPro processors with 6, 4 and 2 cores with professional/corporate-grade Q370 and Q360 chipsets. 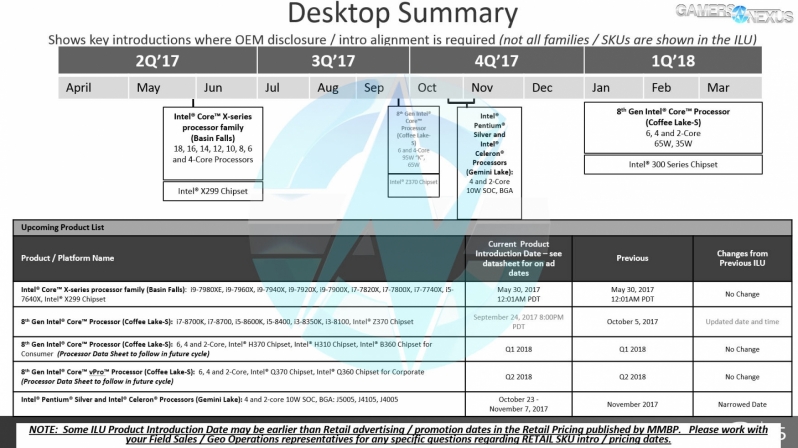 These slides also reveal the existence of Gemini Lake Pentium and Celeron CPUs, which will release with 10W SoCs and 4 and 2 cores. These cores are designed with a BGA package for pre-built small form factor systems and mobile devices.

Gemini Lake is set to release between October 23rd and November 7th. Intel 8th generation 300-series chipset Pentium and Celeron CPUs will not be released until a later date. 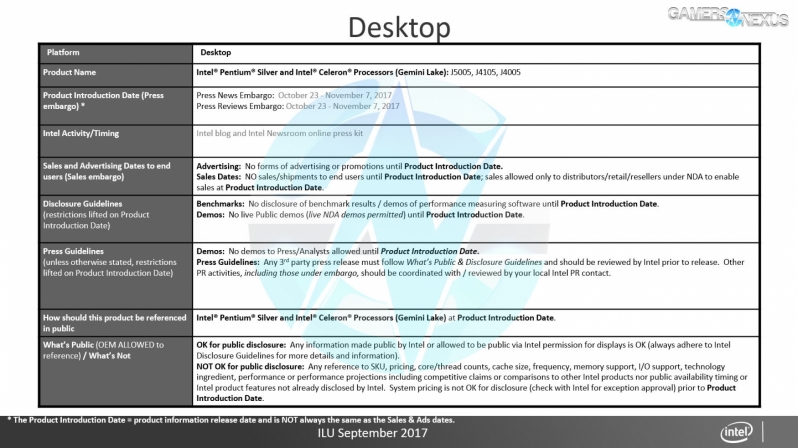 Moving on to Intel's Non-Volatile Memory Solutions Group (SSD Storage), we can also see that Intel has an Optane 900P SSD in the works, with an announcement/reveal at or around CitizenCon. This SSD is said to be marketed alongside Star Citizen as an "Optimized" component.

Intel Optane 900P SSDs will come with storage capacities of 280GB and 480GB, though at this time it is unknown whether or not these SSDS will be made up entirely of Optane/XPoint or if Intel's new memory type will act as a large/fast cache to accelerate a traditional NAND SSD. 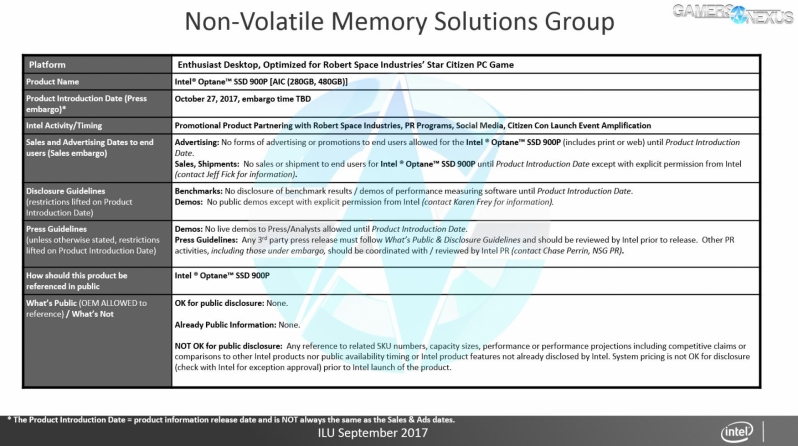 Gamers Nexus has also stated that their source says that Intel's upcoming Z390 chipset will feature greater performance optimisations than Z370, calling Z370 a stop-gap solution to allow Coffee Lake to hit the market faster. Sadly nothing is really known about Z390, though at least it will be a more significant platform improvement over Z270 than Z370.

You can join the discussion on Intel's upcoming launch schedule on the OC3D Forums.