Rumour has it that Intel's next-generation processors will utilise a new socket, moving the company away from LGA 1151 after four generations of products (Skylake, Kaby Lake, Coffee Lake and Coffee Lake R).

Moving forward, Intel needs to add more cores and features to its mainstream processor platform to compete with AMD, who can currently deliver two times as many cores on its mainstream AM4 socket. Enter LGA 1200.

Sketches of Intel's new LGA 1200 socket have been posted online by momomo_us, revealing a socket design that 's similar in size to LGA 1151 and features 49 additional pins. Thanks to LGA 1200's similar size to LGA 1151, it looks like LGA 1200 will support existing Intel-compatible coolers. This means that LGA1156, LGA1155, LGA1150, and LGA1151 compatible coolers will all be supported on LGA 1200, assuming these heatsinks meet the cooling requirements of LGA 1200 processors.

Intel's LGA 1200 socket will reportedly be paired with Intel's planned 400-series of motherboard chipsets, which are due to release in the first half of 2020. 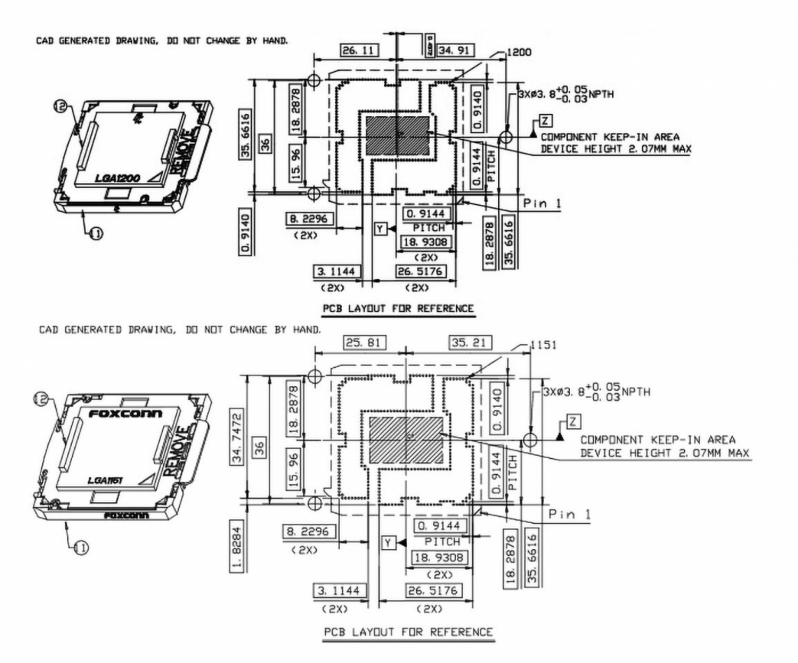 You can join the discussion on Intel's LGA 1200 socket supporting older Intel-compatible coolers on the OC3D Forums.

Dicehunter
Unless there is some actual benefit over a 9900K at 5GHz especially at 1440P, I think this gen will be the first Intel CPU gen I actually skip in a long time.Quote

Avet
Quote:
10 core should be interesting. For the rest of the pack i expect standard Intel 10-15% improvement... Maybe. And all Comet Lake CPUs will have Hyper-Threading.

If they manage to price them correctly i5 (6 cores, 12 threads) could be a good competition for Ryzen 3600.Quote

Dark NighT
Quote:
Either his board or cpu blew up and got refunds and went with intel if i recall correctly.Quote

Dicehunter
Quote:
Yeah the mobo went pop and took the CPU with it, Wasn't a problem I got it all refunded and RMA'd but fancied a swap so went with the 9900K.Quote
Reply