Should we expect a September launch?

Last night, XFastest posted an old Intel 2018/19 product roadmap onto their website, an older roadmap which stated that Intel's 9000-series/9th Generation product lineup would release in Q1 2019, not Q3 2018.

As usual, this roadmap caused quite a stir amongst rumourmongers, leaving some to wonder why Intel's Coffee Lake refresh was delayed and what this means for the consumer market. Releasing in Q1 2019 would place the release of eight-core Coffee Lake dangerously close to the launch of AMD's Zen 2/Ryzen 3000 series product lineup, creating a tricky situation for the company.

This release schedule mirrors Intel's initial Coffee Lake launch, which had high-end Coffee Lake products release in late 2017 and other SKUs (and motherboards) releasing in early-mid 2018. 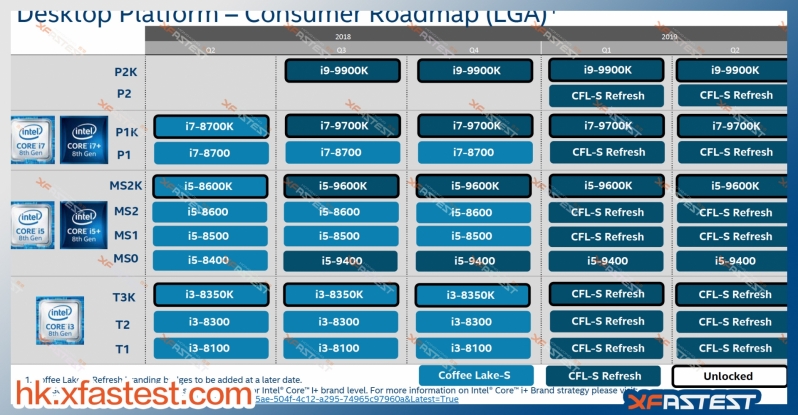 Intel's new Coffee Lake-S lineup of products is set to come to market with new Z390 motherboards, thought the Intel 9000-series is expected to work on current-generation 300-series motherboards. Z390 will not be a major upgrade over Z370, though it is likely to add USB 3.1 support and Wireless-AC support directly into the mainboard's chipset.

Nevermind you changed it

Dicehunter
Quote:
The i7 won't but the i9 will.

Hopefully no one will have to call 999 when their board catches fire from inadequate VRMs.